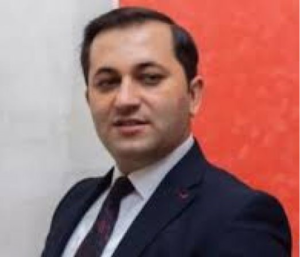 The Chairman of the opposition organization Movement D18 (Democracy 1918), Ruslan Izzatli, was a candidate at the early parliamentary elections on 9 February 2020. His candidacy was registered within the District Election Commission. R. Izzatli was a nominated as a candidate of the 33rd Khatai electoral district of Baku City of Baku. In accordance with the electoral legislation there was held an election campaign. On the day of the parliamentary elections, 9 February 2020, a large number of violations was registered at the polling stations, and it was indicated at the corresponding protocols. Some representatives of the opposition political and public sectors have become nominees for the parliamentary elections. However, almost no one made it to the parliament.

On 16 February 2020, the candidates who disagreed with the election results decided to protest in front of the Central Election Commission administrative building.

In this regard, an appeal to the Baku Supreme Executive Authority was drawn up in order to alert the authorities. One of the organizers of the action was Ruslan Izzatli. But the Baku Authority deemed the action unacceptable. Although, the organizers still decided to carry out a protest action and express their disapproval. Due to the prepared action R. Izzatli was summoned to the Baku City Police Department, where he was warned that in case of an unsanctioned action its organizers would be brought to responsibility.

On 16 February 2020, Ruslan Izzatli went out from his house and went to the office of Movement D18 located in the Baku Narimanov district. At 12.30 p. m., approaching the office, he saw a black car with a license plate No. 90-AP-104 parked in the office backyard. In the car, there were three unknown to him men in civilian clothes. Without any explanation, these people grabbed R. Izzatli, forcibly put him in the car and drove him away in an unknown direction. Later, it became clear that the car belonged to the officers of the Baku City Police Department. The members of the Movement D18 organization managed to catch on video and take pictures of the seizure moment and violent treatment of R. Izzatli.

Samira Agayeva, a member of the Movement D18 Board appealed to the Minister of Internal Affairs of the Azerbaijan Republic, Vilayat Eyvazov, through the Internet; in her appeal to the Minister she described what had happened, indicating the car license plate. That appeal was registered at 16:14 on 20 February 2020, about which S. Agayeva received a confirmation on her mobile phone.

According to Ruslan Izzatli’s testimony, he was first brought to the Baku City Police Department, however a few minutes later he was taken away from there in a different direction. R. Izzatli said that while he was in the car, he realized that the people in civilian clothes were in reality the officers from the Police Department. Approximately four hours later (around 5 p.m.) he was brought to the town of Yevlakh, 294 km away from Baku, where he was dropped off in a deserted place. R. Izzatli managed to get back to Baku with great difficulties at about 9 p.m.

The illegal actions of the police officers made Ruslan Izzatli appeal to the Baku Narimanov District Prosecutor’s Office, in which he complained and demanded to initiate a criminal case against the police officers who had violated his rights and freedom. He requested to identify those police officers, provide a legal assessment of their actions and bring them to justice. The complaint also stated that the rights to freedom of assembly and freedom of speech had been violated, since the planned action supposed to be of a peaceful nature.

Beyond the deadline, established by law, for a justified response to the citizens’ appeals, the Baku Narimanov District Prosecutor’s Office did not provide any response regarding the investigation of the complaint to the applicant.

On 26 November 2020, the Baku Administrative Court issued a ruling that Ruslan Izzatli’s claim was considered unsustainable.

The right to appeal is also stipulated in the Article 1 of the Law of the Azerbaijan Republic, “On Appeals of Citizens”. According to the Article:

In accordance with the Article 7.5 of the Law of the Azerbaijan Republic “On the appeal of citizens”, upon consideration of the issue indicated in the appeal, and notification of a citizen (in case of collective appeals just the of the applicants), there is only a justified response shall be treated as a considered appeal. The reply to the appeal is delivered in the official state language. This norm prescribes the fact that not each response may be regarded as a considered complaint. Only a substantiated justified response is regarded as considered complaint.

The Article 33.1 of the Administrative Procedural Code of the Azerbaijan Republic states, that claimant may require the court to impose, the responsibility to accept the administrative act on respondent, through the claim on compulsion.

From the above-mentioned articles, it is clear that the plaintiff Ruslan Izzatli applied to the Court with the claims in accordance with the legislation. The Baku Administrative Court had to consider his claim.

In the Court ruling it was written, “As it is evident, the plaintiff demanded a substantiated response to his complaint concerning the pressure by the police officers, and the claim has been sent to the Narimanov district prosecutor’s office”.

The Court’s ruling further states, “As it appears, the claim is about illegal actions of the police officers. According to the Article 67.1 of the Criminal Procedure Code of the Azerbaijan Republic, the district (city) courts function as the courts of first instance”.

On the page 3 of the Court ruling it is said, “The investigation reveals that the claimant’s suit cannot be considered in the administrative proceedings, as it is related to the criminal procedure activities of the administrative body”.

Apparently, the commented court’s ruling contains two opposite conclusions: the first is the claim related to the police officers’ illegal actions, the second is related to the lack of a substantiated response to the appeal.

In view of the fact, that the court’s conclusions are initially erroneous, consequently, the final determination also raises doubts about its legality and validity.

The principle of equality before law and court states, that the court shall be bound to create full and equal opportunities to participants to express their attitude, exercise their procedural rights and duties in the course of administrative procedure (the Article 11.2 of the Code of Administrative Procedure).

The principle of investigating merits of a case and the Article 12 of the Code of Administrative Procedure states:

12.1. Court shall be bound to investigate all factual merits that are significant in proper settlement of a dispute, having been not content with explanations, applications and proposals of participants of judicial procedure, the evidence provided by them and other materials available in case.

12.2. Court shall be obliged to independently gather other necessary evidence on its own initiative or based on the motion by participants. Court may request additional information and evidence from the parties.

The Court, without summoning the claimant to the hearing, without having heard his arguments, and without initiative in a fair case examination, rendered an unlawful and unreasonable ruling, thereby violating the right to a fair trial, guaranteed by the Article 6 paragraph 1 of the European Convention for the Protection of Human Rights and Fundamental Freedoms, the Article 14 of the International Covenant on Civil and Political Rights, as well as the Article 8 of the Universal Declaration of Human Rights.

Dr. Leyla Yunus’s speech on the meeting of Subcommittee on Human Rights of the European Parliament on 17 June 2021

Dr.Leyla Yunus’s speech on the video-conference of Committee on Legal Affairs and Human Rights of the Parliamentary Assembly Council of Europe on 17 May 2021