Following the critics of the human rights suppression in Azerbaijan, it is immediately following a wave of arrests… 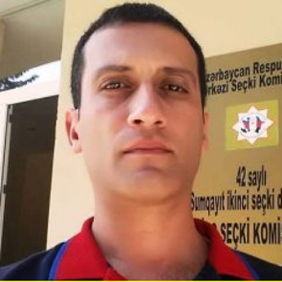 Analysis of violation of law during Elchin Mammad’s judicial proceedings

The representative of the individual who filed the arrest: Elvis Salayev, the Assistant Prosecutor of the city of Sumgayit, the Junior Justice Adviser

The applicant requesting the arrest: Rafiq Gambarov, an investigator at the Investigative Division of the Sumgayit City Police Department

On 30 March 2020, Elchin Mammad, the Head of the non-governmental organization (NGO) “Legal Enlightenment of the Sumqayit Youth” and the chief editor of the website www.yukselis.info, was detained in the city of Sumqayit on suspicion of stealing the property belonging to someone else. A search was carried out in the NGO office “Legal Enlightenment of the Sumqayit Youth”, which led to the discovery of some gold jewelry in the amount of 7,500 AZN, allegedly belonging to the Sumqayit resident Aysel Mustafayeva.

It is known that A. Mustafayeva made a complaint to the police regarding the fact that Elchin Mammad had stolen some golden jewelry from her bag. E. Mammad said, in his report addressed to the Turan News Agency, that Aysel Mustafayeva had applied to him for legal assistance, and then she complained to the police that he had stolen her jewelry. Elchin Mammad called that accusation as absurd. He also stated that the woman had falsely testified in a criminal case against Anar Mammadov, the editor of www.criminal.az. Elchin Mammad linked the prosecution against him to a report on the human rights situation in Azerbaijan, which has been published on his website on 24 March 2020: https://yukselis.info/2020/03/hesabat-muxalif-liderlərə-isgəncələr-və-tənqidi-fikirlərə-qarsi-kibercinayətkarliq/

It should be reminded that Elchin Mammad was also a candidate to the Parliament from the 42nd electoral district of Sumgayit on 9 February 2020. In the period of 2014 and 2015, he had been repeatedly detained but not subjected to criminal charges.

On 31 March 2020, Elchin Mammad was accused of committing a crime under the Article 177.2.4 (robbery involving considerable damage) of the Criminal Code of the Azerbaijan Republic (CC AR).

The Amnesty International issued a petition in connection with the arrest of Elchin Mammad stating, “This new criminal case is again justified by false accusations and it is an act of revenge for his critical reports in the field of human rights”. – https://www.amnesty.org/en/documents/eur55/2069/2020/en/

Amnesty International Netherlands is holding Urgent Action for Elchin Mammad, which you may find here: https://www.amnesty.nl/forms/urgentaction-azerbeidzjan-elchin-mammad

On 31 March 2020, the Sumqayit City Court ruled that Elchin Mammad should be taken into custody for a period of 3 months.

The court verdict is unlawful and unjustified. According to the Article 9 of the Criminal Procedure Code of the Azerbaijan Republic (CPC AR), the criminal proceedings are based on three basic principles:

Each charge must be reasonable and in accordance with the law.

The court has chosen the harshest preventive measure against Elchin Mammad. The ruling sets out the grounds upon which the precautionary measure in the form of arrest has been chosen. Thus, the court precised:

It is evident from the court ruling that none of the listed grounds had been supported by any strong and irrefutable facts that would have justified the implementation of a strict preventive measure.

The Plenum of the Supreme Court on 3 November 2009, while considering “The implementation for the application of the law by the courts”, drew the courts’ attention to the strict observance of the Article 28 of the Constitution, the Articles 5 and 6 of the European Convention for the Protection of Human Rights and Fundamental Freedoms, and the rules of criminal procedure law and practice of the European Court. The courts must take into account the seriousness of the strictest preventive measure, the restriction of the detainee’s rights and the avoidance of formal treatment in examining submissions.

Also, in the Decision of the Plenum of the AR Supreme Court, it is specified that the courts should pay attention to the fact that according to the precedents of the European Court of Human Rights (ECHR) the application of preventive measure in the form of arrest is admitted, whereas the interests of society prevail the right to freedom of an accused, i.e. if the freedom of an individual creates negative emotions in society and can be dangerous for the public.

In the case of the human rights defender and journalist Elchin Mammad, the court did not take into account the recommendations of the Plenum of the AR Supreme Court when it applied the measure in the form of arrest.

Keeping Elchin Mammad isolated from the society was not an essential measure, his freedom could not create negative emotions in the society, as it would be possible, for example, in case of mass shooting of people or at fulfillment of any other serious crime, which would be dangerous for the society entailing death of a great number of people. Besides, E. Mammad had left the country on several occasions due to his professional activity, and he always returned to the country. He could have been subjected to any precautionary measure not related to his arrest (such as house arrest, bail, personal recognizance, etc.). Moreover, the court did not indicate in the ruling why the human rights defender had been subjected to the most severe constraint if there had been no justification in his isolation from society. Elchin Mammad did not pose a threat to society.

The Resolution of the Plenum of the AR Supreme Court also stipulates, in the paragraph 2, that the court should have first of all checked the justification and legality of the detention when choosing the measure of restraint. At that, it should be taken into account that a reasonable suspicion covers all information that is sufficient to convince an outside observer that a person has committed a crime.

In the paragraph 3 of the Decision of the Plenum of the AR Supreme Court, it is specified that when selecting a measure of restraint, the courts should not be limited to the formal enumeration of the procedural grounds indicated in the Article 155 of the CPC AR, but they should examine the existence of each ground in relation to the accused person and verify whether it is confirmed by the criminal case materials. The nature of the committed offence, the danger to society and the characteristics of the person, including age, family status, area of activity, health status and other factors, must be taken into account.

In Elchin Mammad’s case, there is a well-founded suspicion that the criminal case was falsified, as the name of the victim, Aysel Mustafayeva, had already appeared in the similar case against the head of the site www.criminal.az, Anar Mammadov. In the Anar Mammadov’s case, it was obvious that Aysel Mustafayeva had provided a false testimony. There is a well-founded suspicion that A. Mustafayeva’s testimony in the case of Elchin Mammad has also been fabricated. But despite that the court has chosen the strictest measure of restraint against the human rights activist

The right to freedom guaranteed by the Article 28 of the Azerbaijan Republic Constitution was also violated with regard to Mammad Ibrahim. According to this article:

2.Except extermination of enemy soldiers in a case of military aggression, when executing the sentence and in other cases envisaged by law, right of every person for life is inviolable.

The implementation of the measure in a form of arrest is strictly regulated by the international norms. Arrest is possible in clearly confined cases. According to the Article 5 (1) of the European Convention for the Protection of Human Rights and Fundamental Freedoms,

The ECHR, in the case of Wicks v. United Kingdom, of March 2, 1987, it was stated in the judgment in the paragraph 40: “Article 5 (art. 5) applies to “everyone”. All persons, whether at liberty or in detention, are entitled to the protection of Article 5 (art. 5), that is to say, not to be deprived, or to continue to be deprived, of their liberty save in accordance with the conditions specified in paragraph 1 (art. 5-1) and, when arrested or detained, to receive the benefit of the various safeguards provided by paragraphs 2 to 5 (art. 5-2, art. 5-3, art. 5-4, art. 5-5) so far as applicable”. –

“The pervasive idea of the Article 5 is the idea that any infringement on the personal freedom of any individual should not only be in the national interest, but should be carried out legally. First of all, it should be noted that such an encroachment must be strictly justified in accordance with the law in force in that State and must also be carried out legitimately. Two other provisions of the Article 5 emphasized the imperative of strict legality in doing so.” – http://www.rrpoi.narod.ru/echr/commentary/st5_2.htm

Thus, it is evident that a violation of the right to freedom with regard to the human rights defender and journalist Elchin Mammad has occurred in the present case.