After all, Aqil Humbatov was placed in a psychiatric hospital. The doctor A. Rasulov continues the practice of the KGB in Azerbaijan in the XXI century 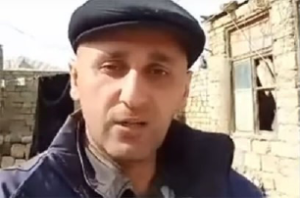 Analysis of violation of law during Aqil Humbatov’s judicial proceedings

The person against whom the application was filed: Aqil Humbatov.

The legal representative of Aqil Humbatov: the member, Elvin Mikayilov, of the Commission for Guardianship and Trusteeship under the Executive Power of Sabunchi District.

Aqil Humbatov is a 37-year-old unemployed member of the opposition Popular Front Party of Azerbaijan (PFPA), lives in Zira settlement area of Baku city, and has three young dependent children: a two-year-old son, a six-year-old son and a four-year-old daughter. He collects cardboard from dumps and sells it in order to make some money to feed his children.

Aqil Humbatov has repeatedly criticized the country’s president on his Facebook page. In March 2020, Humbatov addressed the President of the country on Facebook and harshly criticized the latter. Humbatov raised the issue of child benefits since he, having three young children, needs some medical care for one of his sons. See:

On 30 March Aqil Humbatov was detained and brought to the Republican Psychiatric Hospital in the village of Mashtaga. On the same day, the Head doctor of the hospital, Agahasan Rasulov, applied to the Sabunchi District Court of Baku City for a ruling on the forced placement of Aqil Humbatov at the psychiatric hospital.

On 1 April 2020, the Judge of Baku City Sabunchi District Court Samir Talybov, having studied the case materials and heard the trial participants’ testimonies, ruled to decline the petition of the psychiatric hospital head physician Agahasan Rasulov.  The Judge S. Talybov stated in his ruling that the psychiatrists had not provided irrefutable evidence of Aqil Humbatov’s danger to others or himself. They also failed to provide convincing and credible evidence that A. Humbatov had been unable to account for or direct his actions due to any mental disorder. See: https://www.ipd-az.org/ru/agil-gumbatov/

The next day, Agahasan Rasulov, the head physician of the 1st Republican Psychiatric Hospital, having disagreed with this decision, appealed to the Baku Court of Appeal to annul the first instance court decision dated 1 April 2020.

On 3 April 2020, the Civil Collegium of the Baku Court of Appeal chaired by Mammad Mammadov, and the judges, Aflatun Qasymov, Vugar Hasanov, made the following decision: the appeal of the applicant had been satisfied, the judgment of the Baku City Sabunchi District Court of 1 April 2020, had been annulled, and the court ruled on the forced placement of Aqil Humbatov into the Republican Psychiatric Hospital, which was immediately executed.

The court verdict is unlawful, unjustified and inhumane. The decision stated that the first instance court had inaccurately evaluated the evidence in the case, violated a number of substantive and procedural norms and rendered an illegal and unfounded decision. However, it was the first instance court, the Baku Sabunchi District Court that made a legal decision based on the provisions of the AR Constitution and national legislation. See: https://www.ipd-az.org/ru/agil-gumbatov/

It is noteworthy that the legal representative of Aqil Humbatov, Elvin Mikayilov, who was the representative of the Guardianship and Trusteeship Commission under the Executive Power of the Baku city’s Sabunchi district, agreed with the arguments of the appeal and stated in the court that Humbatov indeed was a threat to himself and others.

By forcibly placing Aqil Humbatov in a psychiatric hospital, without any legal grounds, it actually violated Humbatov’s right to freedom, a right that primarily protects an individual’s physical freedom from infringements. The right to freedom is specified in the Article 28 of the Azerbaijan Republic Constitution.

The right to freedom is also enshrined in the European Convention for the Protection of Human Rights and Fundamental Freedoms, the Article 5 (1).

The court referenced Article 11 of the Law of the Azerbaijan Republic “On Psychiatric Care”. According to this article:

11.1.1. when a person with a mental disorder poses a danger to himself and/or others;

11.1.2. when a person is helpless as a result of a mental disorder, i.e. unable to independently fulfill basic life needs;

11.1.3. when failure to provide in-patient care to a person with a severe mental disorder may cause an unavoidable harm to his health or make his treatment impossible.

The decision of the court of appeal does not specify any reasons for changing the decision of the court of first instance. And despite that, issued to forcibly placing the person in a psychiatric hospital; the court was to evaluate all the circumstances and evidential elements available in the case, and point out the concrete serious grounds for placing Aqil Humbatov in the hospital. However, the court, failing to fulfill its immediate obligations, actually deprived Humbatov of his freedom.

Moreover, the witnesses, Tamara Aliyeva, Vugar Amirov, Alimurad Azizov, who had applied to the psychiatric clinic, were not questioned either at the court of first instance or at the court of appeal. The officers of the 1st department of the Baku Khazar District Police Department claimed that A. Humbatov had demonstrated disrespect to the people around him, perpetrated immoral actions. However, no one confirmed that fact, which had not been either taken into account by the Court of Appeal in its ruling.

In addition, there is no evidence that A. Humbatov inflicted any bodily injuries on himself, his family members, neighbors, or any other individuals, or has previously done so.

The forced placement of Aqil Humbatov in a psychiatric hospital might be regarded as an inhuman treatment that is prohibited under both national and international laws.

According to the Article 3 of the European Convention for the Protection of Human Rights and Fundamental Freedoms, no one shall be subjected to torture and inhuman or degrading treatment, or punishment. “The Article 3 of the Convention places the acts or omissions of States under a particularly strict framework, insofar as they are aimed at protecting the dignity, physical and mental integrity of the person … Even in the most difficult cases, such as the fight against terrorism and organized crime, the public authorities must refrain from any action that could be considered as prohibited treatment by this norm. Such treatment shall never be permitted, whatever its deterrent effect, real or presumed, to effectively combat crime”. (Michele de Salvia, “Precedents of the European Court of Human Rights, St. Petersburg, 2004).

There are no exceptions in the Article 3 of the European Convention for the Protection of Human Rights and Fundamental Freedoms, and the prohibition of torture and inhuman treatment always applies in whatever circumstances.  “In order for ill-treatment to constitute a violation of the Article 3, it must reach a minimum level of cruelty. The assessment of this minimum level is inherently relative; it depends on all the circumstances of the case, in particular, on its duration, its impact on the physical or mental condition and, in some cases, on the sex, age, state of health of the victim, etc.” (paragraph 83, Judgment of the European Court of Human Rights in Cruz Varas and Others v. Sweden, 20 March 1991). See: https://www.refworld.org/cases,ECHR,3ae6b6fe14.html

Aqil Humbatov’s wife has repeatedly reported to the press that her husband had been given unidentified pills and injections at the Republican Psychiatric Hospital № 1, the consequences of which were not beneficial to him. Humbatov’s detention in the psychiatric hospital may be prolonged indefinitely, by the doctors of the clinic.

As evident from the court decision, the right to freedom, the right to the prohibition of torture and inhuman treatment, as well as the precedents of the European Court of Human Rights, have been violated with respect to Aqil Humbatov.