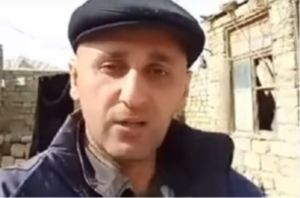 Analysis of violation of law during Aqil Humbatov’s judicial proceedings

The plaintiff in the court: Jalal Mammadov, an investigator of the Khazar District Police Investigation Department.

With the participation of Khatai District Prosecutor, Fakhri Aleskerov.

Aqil Humbatov, a member of the opposition Popular Front Party of the Azerbaijan (PFPA), lives in the city of Baku, Zira settlement, is unemployed and has three young children in in his custody. He collects cardboard from garbage dumps and sells it to feed his children. Humbatov has repeatedly criticized the country’s president at his personal Facebook page. In March 2020, Humbatov addressed the President on Facebook and harshly criticized the Head of the country for not having enough money to support his children. Mr. A. Humbatov raised the issue of child allowances since his three young children are in his custody – https://www.youtube.com/watch?v=ihzNZTheruE

In 2019, Aqil Humbatov was detained for the first time. On 14 March 2019, he was subjected to administrative detention. His Party associates believe that the pressure on Humbatov is linked to his harsh criticism of the President and his direct appeals to the Country Head. On 30 March 2020, he was detained in the Mashtaqi settlement of Baku and placed in the Republican Psychiatric Hospital. On the very same day the hospital’s Head Physician, Agahasan Rasulov, applied to the Sabunchi District Court of Baku City with a request to forcibly place Aqil Humbatov in a psychiatric hospital. The Head Physician substantiated his application by saying that Aqil Humbatov, born in 1983, was urgently admitted to the hospital upon receipt of a letter dated 30 March 2020, sent by the authorities of the Khazar District Police 1st Department. The judge of Sabunchi District Court of Baku, Samir Talybov after having studied the case materials and heard the testimonies of the participants of the trial, came to the conclusion, on April 1, 2020, to dismiss the Head Physician’s application, justifying it by the fact of failure to present in court irrefutable evidence that Aqil Humbatov may be dangerous to society, that he may not manage himself due to some mental disorder or presence of severe mental illness – https://www.ipd-az.org/ru/agil-gumbatov/

However, on 3 April 2020, the Chairman of the Civil Chamber of the Baku Appeal Court, Mammad Mamadov issued a new ruling in A. Humbatov’s case. The judgment of the Sabunchi District Court of Baku dated 1 April 2020, was overturned and a new judgment was issued: Aqil Humbatov should be forcibly placed in the “Republican Psychiatric Hospital” – https://www.ipd-az.org/ru/agil-gimbatov-2/. Yet, after the Amnesty International, with the assistance of the Institute of Peace and Democracy, organized a broad international campaign in support to Aqil Humbatov demanding his release, the Head Doctor of the Psychiatric Hospital, Agahasan Rasulov was obliged to release Aqil Humbatov in a matter of 3 months.

Nevertheless, Aqil Humbatov’s persecution persisted in 2021. In the evening of 11 August 2021, Aqil Humbatov stepped out of the house. At night, his family received a call from the Khazar District Police Department of Baku and was informed that A.Humbatov had committed a crime and was therefore detained. He was charged with a crime under the Article 126.2.4 (Deliberate causing of serious harm to health committed from hooligan prompting) of the Criminal Code of the Azerbaijan Republic (AR Criminal Code). According to the investigation, Aqil Humbatov inflicted serious injuries to a certain citizen, Yaman Mamedov, at whose yard A.Humbatov was collecting remnants of metal and cardboard.

On 13 August 2021, the Khazar District Court of Baku issued a restraint order against Mr. Humbatov in the form of detention for a period of four months.

⦁  Everyone has the right for freedom

This right is enshrined in both National Law and International Treaties.

For example, the European Convention for the Protection of Human Rights and Fundamental Freedoms states in the Article 5 (1):

⦁ Everyone has the right to liberty and security of person.

The right to liberty is also guaranteed by the International Legal Framework. This Norm guarantees a fundamental right, among the most important rights: the right to liberty and security of individuals. The safeguards enshrined in this article apply to everyone: anyone at liberty or in detention has this right.

The courts must clearly justify their rulings when restricting a citizen’s right to liberty, and should do so by referring to the exhaustive list of restrictions set out in the Article 5(1) of the European Convention for the Protection of Human Rights and Fundamental Freedoms.

The grounds upon which the court orders a preventive measure are set out in the Article 155 of the Criminal Procedure Code of the Azerbaijan Republic. Thus, this article states:

⦁ hidden from the prosecuting authority;

⦁ obstructed the normal course of the investigation or court proceedings by illegally influencing parties to the criminal proceedings, hiding material significant to the prosecution or engaging in falsification;

⦁ committed a further act provided for in criminal law or created a public threat;

⦁ failed to comply with a summons from the prosecuting authority, without good reason, or otherwise evaded criminal responsibility or punishment;

The court indicated the following grounds: concealment of the nature and gravity of the act committed from the body conducting the criminal proceedings, reoffending under the criminal law or posing a danger to the society, obstructing the normal course of the preliminary investigation or the court proceedings.

Despite the fact that these grounds were stated in the arrest order, the court did not provide any evidence to justify the harshest measure of restraint.

The Decision of the Plenum of the Supreme Court of the Azerbaijan Republic On the practice of the application by the courts of the law in considering submissions relating to the imposition of measures of procedural coercion against defendants dated on 3 November 2009, states, ” The courts’ attention, while considering the implementation of measures to the accused, must be drawn to the prompt and effective observance of the Article 28 of the Azerbaijan Constitution, as well as the Articles 5 and 6 of the European Convention on Human Rights and the European Convention for the Protection of Human Rights and Fundamental Freedoms (ECHR) and the practice of the European courts”. Avoid a formalistic approach to the submisions’ examination, bearing in mind that the preventive measure of arrest is the most serious one that restricts the rights of the arrested person. The courts should be informed that, according to the case law of the European Court of Human Rights, the use of preventive detention, as a rule, is permissible when the public interest exceeds a person’s right to liberty, i.e. when a person’s detention causes negative emotions in society and dangerous to society.”

As we can see, more than 10 years have passed since the Decision of the Plenum of the Azerbaijan Republic Supreme Court was adopted. However, it is still just on paper, not respected by the courts, and is also grossly violated. The Article 154 of the Criminal Procedure Code states that when imposing a preventive measure in the form of arrest the courts must verify the potentiality of application of the measure.

The court ruling against Aqil Humbatov lacks motivation and justification for the decision, which makes it formal and superficial.

In this case, the presumption of innocence guaranteed by the Article 21 of the Code of Criminal Procedure of the Azerbaijan Republic was violated. According to this article, even if there are reasonable suspicions as to the guilt of the person, this shall not cause the latter to be found guilty. The accused (the suspect) shall receive the benefit of any doubts which cannot be removed in the process of proving the charge in accordance with the provisions of this Code, within the appropriate legal proceedings. He shall likewise receive the benefit of any doubts which are not removed in the application of criminal law and criminal procedure legislation.

The reasonable doubts in the course of the trial have not been resolved and were not interpreted in favour of the accused, thus violating his right to be presumed innocent also guaranteed by the Article 6(2) of the European Convention for the Protection of Human Rights and Fundamental Freedoms.

In view of the above, it can be concluded that the unjustified and unlawful court ruling violated one of the fundamental rights, e.g. Aqil Humbatov’s right to liberty, as well as his presumption of innocence.