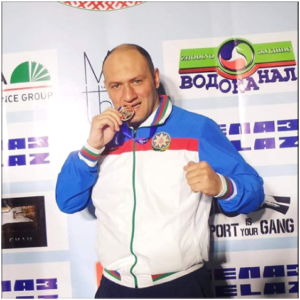 Analysis of violation of law during Said Mammadzade’s  judicial proceedings

The person who initiated the arrest request: Aflatun Salimov, an investigator at the Investigative Department of the Baku Khatai District Police Department

The person who requested the arrest: Teymur Teymurov, the assistant prosecutor of the Baku Khatai district

Said Mammadzade, a member of the opposition People’s Front Party of Azerbaijan (PFPA), was the bodyguard of the party leader Ali Kerimli at many PFPA events. Said Mammadzade is the European champion in no rules fighting, better known by the pseudonym of Said Bakuvi.

Said Mammadzade was detained by the police on 16 May 2020, on the road while taking his child to the hospital.

According to the investigation, on 15 May 2020, at around 10:30 p.m. Said Mammadzade, being at the car wash where he worked, argued with some Rufat Madjidov and injured him with a knife, and then damaged R. Madjidov’s car.

The PFPA informed the media that another party member, Ayaz Maharramli, witnessed the incident at the car wash. He said that a trained man had been sent to the car wash on May 12 who tried to provoke Said. Ayaz Maharramli happened to be at the place when he arrived to wash his car. Rufat Madjidov insulted Said Mammadzade several times right in front of him, but S. Mammadzade remained calm and did not respond to the provocative insults. A.Maharramli also testified that when he had learned about the arrest of Said Mammadzade he immediately realised that some kind of case had been fabricated against Mammadzade. Besides Ayaz Maharramli, there were other witnesses at the car wash who could confirm Said’s innocence.

The investigators accused Said Mammadzade in committing a crime under the Article 221.3 (The hooliganism committed with application of a weapon or subjects, used as the weapon) of the Criminal Code of Azerbaijan Republic.

Following the accusation, Aflatun Salimov, an investigator of the Investigation Department of the Baku Khatai Police Department and Teymur Teymurov, an assistant Prosecutor of the Baku Khatai district, addressed to the court with a petition requesting a preventive punishment measure in the form of imprisonment for 3 months with regard to Said Mammadzade.

On 18 May 2020, the Baku City Khatai District Court issued a ruling on selection of preventive measures against Said Mammadzade in the form of 3- month-imprisonment.

The observance of human and civil rights and freedoms is mandatory in any case, and may only be lawfully restricted. The list of such restrictions is fairly clear and shall not be construed freely.

The Criminal Procedure Law provides 10 preventive measures, the most severe of which is arrest. In case of Said Mammadzade, the arrest had been chosen as a precautionary measure during the preliminary investigation.

According to the Article 155 of the Criminal Procedure Code of Azerbaijan Republic, grounds for the application of restrictive measures:

There are the following grounds in the arrest warrant concerning Said Mammadzade:

It should be noted that in listing each ground justifying the imposition of an arrest warrant, the court should refer to the specific proof and arguments of the prosecution side that are directly relevant with regard to Said Mammadzade. As can be seen from the ruling, the court has failed to fulfil this task. It merely enumerated the norms of the Criminal Procedure Law relating to the choice of preventive measure, and indicated in the ruling the version of the prosecution that included 3 grounds for the arrest:

There is such a ground in the list as the possibility of hiding from the investigation. So, the investigators assume that Said Mammadzade may hide from the investigation. But according to the Article 155.6 of the Criminal Procedure Code of Azerbaijan Republic, in all cases where a restrictive measure is applied, the passport or other document confirming the identity of the suspect or accused shall be taken from him and added to the prosecution file until the final resolution of the suspicion or charge.

However, the accused’s passport is confiscated, which means that he cannot leave the country. This ground has no legal justification for the investigation.

Further, the prosecution’s conclusion that there are sufficient grounds to assume that the accused could obstruct the normal course of the investigation is unjustified. Since the court ruling does not provide any reason to prove this.

With regard to the fact that the sanction of the incriminated article provides for a punishment of more than 2 years, this rule of the criminal procedure law contradicts the norms of the International law. According to the Article 2.3. of the Code of Criminal Procedure of Azerbaijan Republic, if there are rules in the International Treaties with the participation of the Azerbaijan Republic other than those in this Code, the rules of the International Treaties shall apply. This procedural rule contradicts the presumption of innocence enshrined both in the national law and in the European Convention for the Protection of Human Rights and Fundamental Freedoms, Article 6 (1), which guarantees the right to a fair trial. The Court did not consider applying alternative non-arrest measures of constraint.

The arrest of Said Mammadzade violated the European Convention for the Protection of Human Rights and Fundamental Freedoms, Article 5(1) (Paragraph C), which guarantees an individual’s right to freedom and security.

According to the Article 5:

(C) the lawful arrest or detention of a person effected for the purpose of bringing him before the competent legal authority on reasonable suspicion of having committed an offence or when it is reasonably considered necessary to prevent his committing an offence or fleeing after having done so;

The European Court of Human Rights Judgment in the case of Weeks v. the United Kingdom on 2 March 1987, states “The Article 5 applies to ‘everyone’. All persons, whether at liberty or in detention, are entitled to the protection of Article 5 (art. 5), that is to say, not to be deprived, or to continue to be deprived, of their liberty save in accordance with the conditions specified in paragraph 1 (art. 5-1) and, when arrested or detained, to receive the benefit of the various safeguards provided by paragraphs 2 to 5 in so far as applicable… The pervasive idea of the Article 5 is that any infringement of a person’s personal freedom should not only be in the national interest, but should only be exercised legally. First of all, it should be emphasized that such an encroachment must be strictly justified under the State’ s legislation and must also be carried out lawfully. The other two provisions of the Article 5 underline the need for strict legality in this regard. ”

Thus, the arrest of Said Mammadzade was not either lawful or legitimate. The Court’s arrest warrant violated Said Mammadzade’s right to liberty and security of person.