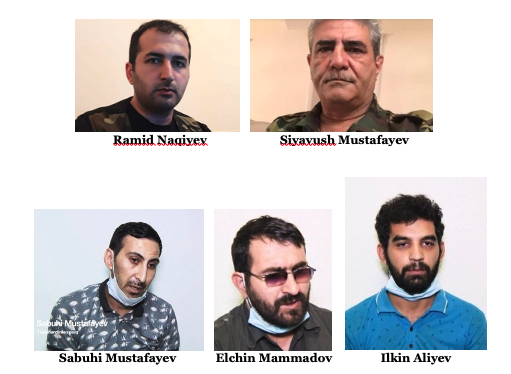 In the courtroom there were also attending lawyers

The defendants participating at the trial by video conference:

On 13-14 July 2020, in Tovuz, there were violent fights between the two sides on the border of Azerbaijan and Armenia. As a result of the fighting, eleven Azerbaijani army soldiers were killed, including General Polad Hashimov and Colonel Ilqar Mirzoyev.

On 15 July 2020, a meeting in support of the Azerbaijani army was held in Azerbaijan. A large number of people have made a long way from Sumgayit to the center of Baku. The protesters walked from the center of the city to the Presidential Palace, and then to the Parliament building. According to the witnesses, a small group of strangers broke into the Parliament building and caused damage to the state property. As the participants said, those people had been intentionally sent as provocateurs to break the law. The State Security Service employees were also noticed in the crowd on the photos captured during the rally. Following the rally, 36 people were detained and charged with disruption of public order, resistance to the authorities and others.

The defendants Fuad Qahramanli, Mammad Ibrahim, Ayaz Maharramov and Bakhtiyar Imanov were charged with committing crimes under the articles:

From 17 to 28 July 2020, almost daily, there were trials in the Nasimi District Court of Baku, in the course of which the above 36 defendants were sentenced to a 3-month detention measure.

In October 2020, the Prosecutor’s Office filed a motion to change the preventive measure in the form of house arrest for 21 defendants:

The trial to consider the Prosecutor’s Office’s submission was scheduled at 11.00 on 27 October 2020. Due to the worsening of the Covid-19 epidemic situation, the preliminary hearing was postponed. On 16 November 2020, taking into account the epidemic situation in the country, the court, on its own initiative, decided to hold the trial by means of video conference. Thus, the defendants participated in the court hearing via Skype. The Prosecutors requested the court to satisfy the submitted motion. All the defendants and their lawyers also asked the court to replace the preventive measure by house arrest.

On 17 November 2020, the Sabayil District Court of Baku city issued a ruling to change the preventive measure to house arrest in respect of all 21 defendants, with the condition not to leave the place of residence from 11.00 p.m. to 07.00 a.m., to wear an electronic means of supervision, keep it in good condition and not to change the place of residence without the court notifying.

Commentary by expert lawyer:
A court ruling is partly lawful and partly justified.
There are several basic principles in criminal proceedings: to determine the rules that constitute the core of criminal prosecution; to ensure the protection of an individual and a citizen against cases of illegitimate restriction of their rights and freedoms; to determine the legality and validity of each criminal prosecution. Violation of the criminal procedure principles or conditions in the cases stipulated by this Code may lead to the invalidity of the criminal prosecution proceedings, or to the annulment of the rulings adopted in the course of the proceedings or to the conclusion that the gathered materials have no evidentiary value (the Article 9.2. of Criminal Procedural Code of the Azerbaijan Republic). In this case, the court respected all principles, in accordance with the Criminal Procedural Law.
According to the Article 163.1 of Criminal Procedural Code of the Azerbaijan Republic, the house arrest is a restrictive measure which restricts a person’s liberties and some other rights by a court decision, without the accused being detained on remand and isolated completely from society.

According to the Article 163.3 of Criminal Procedural Code of the Azerbaijan Republic, house arrest may be accompanied by application of the following measures, separately or where possible jointly:

163.3.1. prohibition of leaving one’s home at any time or at certain times;
163.3.2. prohibition of speaking on the telephone, sending mail or using other means of communication;
163.3.3. prohibition of contact with certain people and of receiving visits from anyone at home;
163.3.4. application of electronic monitoring devices and obligation to wear them and operate them;
163.3.6. placing under observation of the accused or his home, as well as a police guard on his house, flat or other accommodation given to him.

Apparently, when changing the preventive measure, the court imposed on the accused all the conditions listed in the Article 163.3. of Criminal Procedural Code of the Azerbaijan Republic that must be observed in the case of house arrest.
The Resolution of the Azerbaijan Republic Supreme Court Plenum “On Application of the Provisions of the European Convention for the Protection of Human Rights and Fundamental Freedoms and the Cases of the European Court of Human Rights in the Administration of Justice” adopted on 30 March 2006, states in the paragraph 13 “It is recommended that the courts should not allow the use of preventive measure in the form of arrest as a usual practice, referring to the paragraph 3 of the Article 9 of the International Covenant on Civil and Political Rights, to which the Azerbaijan Republic is a party. It is preferable to keep an individual free if there is a guarantee that the entity appears in the court. A measure of restraint in the form of arrest should be regarded as exceptional and applied only in case of absolute necessity, when another measure of restraint cannot be applied.
The Paragraph 16 of the Supreme Court Plenum’s Resolution states “It should be emphasized that a reasonable suspicion that a person has committed a crime is a prerequisite for his detention. However, such suspicions are not sufficient for the continued detention. Apart from reasonable suspicion, there should be other grounds to justify an individual’s detention. Hiding from the prosecutor’s office some actions, obstructing the normal course of the preliminary investigation or the court proceedings through concealment or falsification of criminal matters through illegal influence on the people involved in the criminal proceedings, multiple offences or committing an act stipulated by the criminal legislation; for example, endangering society. However, these grounds must be feasible, i.e. confirmed by the reliable information. The courts, while extending the preventive measure in the form of arrest, should indicate the grounds for such a measure in their rulings and prove them”.
The court properly applied the Azerbaijan Republic Supreme Court resolution.

The directions of the Azerbaijan Republic Supreme Court Plenum “On the practice of application of the legislation by the courts while considering the requests on the choice of preventive measure against the accused” dated on 03 November 2009, were also fully observed by the court.

The Paragraph 10 of this Resolution states “It should be clarified to the courts that in accordance with the requirements of the Articles 157.5 and 448.1.3 of Criminal Procedure Code of the Azerbaijan Republic, if the court determines that the individual’s isolation from the society is unnecessary when considering applications for preliminary detention or prolongation of the detention period, instead of the detention measure it may be chosen house arrest as the measure of restraint. The Court of Appeal shall also be entitled to adopt a decision of similar detention (on the choice of a preventive measure in the form of house arrest in respect of the accused) when considering an appeal or objection. When choosing a measure of restraint in the form of house arrest, the courts shall take into account the accused’s age, health condition, family status and other circumstances. All or a part of restrictions stipulated by the Article 163.3 of Criminal Procedure Code of the Azerbaijan Republic can be applied to the accused placed under the house arrest according to the crime gravity. Application of these restrictions must be included in the court ruling”.

Unfortunately, the court ruling contains one “but”. The Article 163.3 of Criminal Procedure Code of the Azerbaijan Republic lists the restrictions applied to the accused during the period of house arrest. The court applied all the listed restrictions to the accused, but it did not justify why instead of one or two restrictions they imposed to apply all at once. Moreover, the same restrictions were used towards all 21 defendants. Here, the court did not treat each defendant individually.

Thus, the Article 5 (1) of the European Convention for the Protection of Human Rights and Fundamental Freedoms, the Article 9 of the International Covenant on Civil and Political Rights, the Article 9 of the Universal Declaration of Human Rights prohibit arbitrary arrests and indicate that a person’s physical freedom must be protected. While the court ruling protected the accusers’ right to liberty, however, all the restrictions imposed on them raised questions about their full legality and justification.

Dr. Leyla Yunus’s speech on the meeting of Subcommittee on Human Rights of the European Parliament on 17 June 2021

Dr.Leyla Yunus’s speech on the video-conference of Committee on Legal Affairs and Human Rights of the Parliamentary Assembly Council of Europe on 17 May 2021