On 27 April 2019, a member of the Muslim Unity Movement (MUM), Elnur Mehdiyev, was arrested in Turkey. As his relatives informed Meydan TV, he was brought from the police department to the Migration Service for further deportation to Azerbaijan on 01 May. In this regard, Mehdiyev’s lawyer asked the Turkish President Recep Tayyip Erdogan not to deport his client. Turkish human rights activists also insisted on not having him deported to Azerbaijan.

Mehdiyev’s relatives also say that his stay in Turkey was legal and that he had not been involved in any illegal activity there. Therefore, they believe that Mehdiyev’s detention is based on instruction sent by the Azerbaijani government. It is believed that he was wanted in connection with the events in Nardaran in November 2015, when two security forces and five local residents had been killed in a special operation in Nardaran. 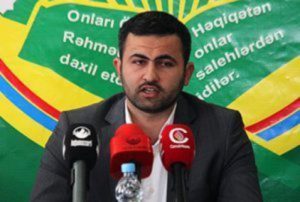 At around 5 p.m., on Friday, the deputy chairman of the MUM, Elchin Gasymov, was detained at his home and transported to the Sabunchi District Police Department. He managed to write about it on his Facebook page. He also added that his father had received phone calls in the last two days asking him to demand his son to come to the police. “Since the reasons for the calls were not provided, I hadn’t gone. Have they come to detain me? And we are going to the Sabunchi district police. Let’s see what they say,” he wrote on his Facebook page.

He was told by the police that he, as a believer, had been active on a social network and demanded to stop that activity. The police were also interested in getting his family members’ phone numbers.  However, half an hour later, the police suddenly released Elchin Gasymov with a warning.

We would like to remind that Elchin Gasymov has been convicted in connection with the Nardaran events of 2015. He was pardoned in March this year.