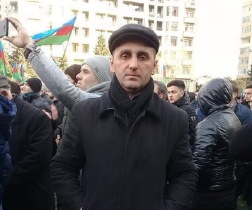 The practice of psychiatric abuse against dissidents widely exercised in the Soviet Union continues as a tool of political repression under Azerbaijan’s post-Soviet dictatorial regime. The country’s president, Ilham Aliyev, is the son of KGB general and Politburo member Heydar Aliyev, who was Azerbaijan’s president from 1993 until his death in 2003. Ilham Aliyev not only inherited the presidency from his father, but also continued using the methods of dealing with political opponents his father had developed during his time as chairman of Soviet Azerbaijan’s KGB.

Commenting on the Covid-19 pandemic on 19 March this year, Aliyev described the republic’s democratic opposition as a “fifth column” and declared war on it. Just three days later, the first wave of opposition arrests commenced. But it was not only prisons that regime critics were sent to.

On 30 March, 37-year-old Agil Humbatov, a member of the Azerbaijan Popular Front Party, was arrested and taken to a police station. The reason for his detention was an interview he had given to the Azerbaijan branch of Radio Liberty, in which he criticised the government and the healthcare system in the republic. As Humbatov later said, an ambulance was called to the police station, with him and the police then being driven to a republic psychiatric hospital in the village of Mashtaga. Head doctor Agahasan Rasulov petitioned the Sabunchu District Court in Baku to have Agil Humbatov forcibly placed in the hospital. At the court case, a doctor called Fakhraddin Ibrahimov represented the hospital.

However, the system of repression established by the dictator failed. On 1 April, the judge Samir Talybov, having examined the case material and heard testimonies from those at the trial, rejected the hospital’s petition. In his verdict, the judge stated that the psychiatrists did not provide conclusive evidence that Gumbatov was a danger either to others or himself. Further, they did not supply convincing or reliable information that Gumbatov would be unable to provide an account of his actions due to some supposed mental disorder.

On the very same day, judge Samir Talybov went to the psychiatric hospital and presented the court decision to head doctor Agahasan Rasulov. The judge made sure that Humbatov’s release was legalised and then personally had Humbatov sent home by taxi.

The following day, Rasulov appealed against the court’s decision at the Baku Court of Appeal, with the chairman of the court of appeal’s board of civil cases Mamed Mamedov ruling immediately thereafter that Humbatov be compulsorily confined to the hospital, which was then promptly carried out.

Humbatov is currently being held at the hospital, and as he told his wife by telephone is being given a medicine which is unknown to him. This then leaves him feeling “lethargic”. The length of time Humbatov is to be held in the psychiatric hospital has as yet not been stipulated, with there being nothing to stop him remaining there for the rest of his life.

The judge Samir Talybov, who had released Humbatov from the psychiatric hospital, received a telephone call from the president’s office demanding that he write a letter of resignation, which he promptly did. Within one day, the Azerbaijani judicial council had already dismissed Talybov from his position as judge.

Chief physician Agahasan Rasulov used to work as the chief psychiatrist for the ministry of national security, the successor to the Soviet KGB, and was repeatedly involved in scandals. The Azerbaijani press have reported that Rasulov uses hospital patients “like slaves”. He assigns patients to carry out building and agricultural work he then receives payment for. He also established a team of former athletes at the hospital who at his command would beat patients who misbehaved, including his personal slaves. At the hospital that he runs, antipsychotics are being used, along with electroshock therapy.

Agil Humbatov is a driver by trade who had been employed by the municipal authorities. Fired for opposition activities, he was unemployed prior to his arrest. He has a wife and three children: a boy aged six, a girl aged four and another boy aged two. Humbatov is an activist for the opposition Azerbaijan Popular Front Party (APFP). In March last year he was detained by the police for taking part in a party meeting and imprisoned for 30 days.

Azerbaijan is reviving the use of “punitive psychiatry” against the opposition. If Aqil Humbatov is not released soon, other oppositionists will be imprisoned in psychiatric hospitals too.

This article was published in France on June 14, 2020 in French.