In Azerbaijan, those who criticize the President Ilham Aliyev are deprived of their freedom… 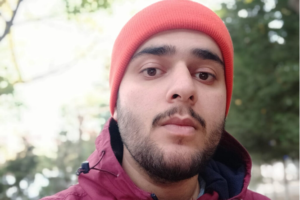 Analysis of violation of law during Elmir Abbasob’s judicial proceedings

Elmir Abbasov: a defendant subjected to an administrative case

Eldar Ibrahimov, a plaintiff: a police officer of the 4th Police Station of the Sumgayit City Police Department, who initiates a lawsuit on administrative offenses

Elmir Abbasov, a member of the NIDA Civic Movement, is known for his sharp critique of the state’ first officials on the social networks. In January 2021, one evening, a vehicle VAZ 2107 obstructed his way on the street. According to E. Abbasov, the man in the car asked for his name and suggested to get into the car to ride to the police just to talk. E. Abbasov requested to send him an official summons but he was forced into the car and brought to the Sumgayit City Police Department. There, he was told that the reason for his detention was his critical posts concerning the President on the social networks.  The following day, Elmir Abbasov told the press that he had been released two hours later and only when he had deleted the posts.

On 20 February 2021, a 27-year-old E. Abbasov was again detained by the police. He was charged with an administrative offence under the Article 206 (Illegal consumption of drugs, psychotropic substances, manufacturing, purchasing, storing, transporting or sending not for the purpose of selling, in the quantity necessary for his personal consumption) of the Code of Administrative Offences of the Azerbaijan Republic.

In the course of the trial, Elmir Abbasov did not plead guilty to the specified administrative offence. The police officers, Ramil Ibrahimov, Ibrahim Allahverdiyev and Tale Mehdiyev, who were interrogated at the trial, provided the same testimonies against E. Abbasov. In the court ruling, these testimonies are absolutely same and written literally word for word. No witnesses for the defence were questioned in the court.

On 20 February 2021, the Sumgayit City Court found Elmir Abbasov guilty of the offense under the Article 206 of the Administrative Offences Code and sentenced him to 1 month of administrative detention.

The young activist attributed the reason for his arrest to his critical views regarding the President of the Azerbaijan Republic.  –

On 4 March 2021, Elmir Abbasov’s mother, Matanat Abbasova, told the press that she had visited her son at the temporary detention facility of the Sumgayit City Police Department, where he had not been provided with the necessary sanitary conditions. According to her, her son had not been able to take a shower for the past 14 days. She complained that the clothes she had brought to her son in the last 10 days had not been given to him. For 14 days, E. Abbasov has been wearing the same clothes.

The court verdict is unlawful and unjustified. There are serious violations of both National and International laws in the administrative case initiated against Elmir Abbasov.

In the judgment of the European Court of Human Rights (ECHR) in the case of Kurt v. Turkey of May 25, 1998, it is written, “The Court underlines the fundamental importance of the guarantee of the individual’s rights in a democratic society against arbitrary arrest or detention by the authorities, as set out in the Article 5.That is why, the Court has repeatedly emphasized in its judgments that any deprivation of liberty must not only be in accordance with the basic procedural norms of the national law, but also meet the objectives of the Article 5, i.e., to protect the individual from arbitrary authority’s conduct. This imperative to protect individuals from any kind of abuse by the authorities is confirmed by the fact, that the Article 5(1) confines the circumstances under which a person may be lawfully deprived of his liberty, although these grounds must not be interpreted in a broad manner, since they are exceptions of the fundamental guarantees to the individual’s freedom”. –

As it was mentioned above, Elmir Abbasov had been detained in the same clothes for 14 days, whereas his mother had brought him fresh clothes, yet, the clothes had not been handed over to E. Abbasov. Keeping a young activist in the same clothes for the period of 14 days is considered ill-treatment and inhumane. Under the European Convention for the Protection of Human Rights and Fundamental Freedoms, the Article 3, no one shall be subjected to torture or inhuman or degrading treatment or punishment. This Article provides no exception and applies both in the fight against terrorism and the Mafia and in times of war. The Article 3 of the European Convention is unconditional and categorically prohibits torture and inhuman treatment.

The European Court of Human Rights judgment in the case of Aksoy v. Turkey dated December 18, 1996, stated, “The Article 3 (…) protects one of the basic values of a democratic society. Even in the most difficult contexts, such as the fight against terrorism and organized crime, the Convention categorically prohibits torture, inhuman / degrading treatment or punishment. Unlike most of the Articles of the Convention and Protocols No. 1 and 4, there are no exceptions provided under Articlethe 3, and according to the Article 15(2) there can be no derogations from the Article 3 even in case of a public emergency threatening the existence of the nation.” –

The United Nations Standard Minimum Rules on the Treatment of Prisoners (known as the Nelson Mandela Rules, named after the South African President Nelson Mandela) were adopted by the United Nations General Assembly on 17 December 2015. Under the Rule 1, all prisoners are to be respected due to their inherent dignity and value as human beings. Neither torture nor other cruel, inhuman or degrading treatment or punishment shall be inflicted on any prisoner, all prisoners shall be safeguarded from it, and no circumstances whatsoever may be invoked as a justification for it. There shall at all times be the safety and security of inmates, staff, service providers, and visitors.

It is stated in Rule 16 of the Nelson Mandela Rules,

“Adequate bathing and shower installations shall be provided so that every prisoner may be enabled and required to have a bath or shower, at a temperature suitable to the climate, as frequently as necessary for general hygiene according to season and geographical region, i.e. at least once a week in a temperate climate.”

Rule 19 specifically refers to a prisoner’s clothing and bedding. It states:

“If prisoners are allowed to wear their own clothing, arrangements shall be made on their admission to the prison to ensure that it shall be clean and fit for use.”

“The Nelson Mandela Rules” formed the basis of the European Prison Rules, approved by the Committee of Ministers on 12 February 1987.

In the segment of “Personal hygiene” note:

“20. Prisoners shall be required to keep their persons clean, and to this end they shall be provided with water and with such toilet articles as are necessary for health and cleanliness.

“21. In order that prisoners may maintain a good appearance compatible with their self-respect, facilities shall be provided for the proper care of the hair and beard, and men shall be able to shave regularly”.

The European Court of Human Rights judgment in the case of Selcuk and Asker v. Turkey on 24 April 1998 states, “The Court recalls that ill-treatment must attain a minimum level of severity if it is to fall within the scope of Article 3. The assessment of this minimum is relative: it depends on all the circumstances of the case, such as the duration of the treatment, its physical and/or mental effects and, in some cases, the sex, age and state of health of the victim”. – file:///C:/Users/User/Downloads/001-58162.pdf

Wearing the same clothes for 14 days following the arrest should be interpreted as a minimum level of mistreatment. That fact is illustrated by the refusal to hand over clean clothes brought in by the prisoner’s mother. The ill-treatment, in this case, is of a continuing nature and is intended to cause the detainee distress.

“The Committee reaffirms that persons deprived of their liberty must not be subjected to any deprivation or burdens other than those resulting from their incarceration, and that they must be treated in a humane manner and with respect for their dignity.”  – file:///C:/Users/User/Downloads/G1835144.pdf

There was also a violation of the Article 10 of the European Convention for the Protection of Human Rights and Fundamental Freedoms in relation to Elmir Abbasov. According to this article,

The arrest of Elmir Abbasov was due to his social network posting, which was characterized by sharp criticism of the State President. The right to freedom of speech interference was not legitimate, it was intended to force the young activist to shut up. This interference did not comply with the Norms within a democratic society and was not in line with the objectives of the Article 10.2 of the European Convention for the Protection of Human Rights and Fundamental Freedoms.

The right to freedom of expression is also protected by the International Covenant on Civil and Political Rights, the Article 19 (paragraphs 1 and 2), as well as by the Article 19 of the Universal Declaration of Human Rights.

The judgment of the European Court of Human Rights in the case of Handyside v. the United Kingdom of 7 December 1976 states:

“Freedom of expression, as defined in Article 10(1), is one of the supporting pillars of a democratic society, fundamental to the progress and self-fulfillment of each of its members. Within the requirements of paragraph 2, freedom of expression encompasses not only “information” or “ideas” that are favourably received or regarded as innocuous or neutral, but also those that offend, shock or disturb. These are the demands of pluralism, tolerance and liberalism, without which there is no “democratic society”. –

The young activist’s arrest and the violations of his fundamental human rights are a continuation of the authorities’ repressive policy aimed at silencing dissenting voices.