The Azerbaijani courts ignore violations of the AR voters’ rights 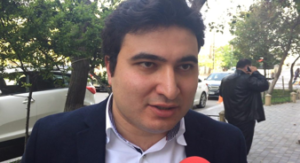 Analysis of violation of law during Samad Rahimli’s judicial proceedings

The Baku Court of Appeal, Chamber of Administrative offences

Respondent: The Central Election Commission of the Azerbaijan Republic

Samad Rahimli, a practicing lawyer, has submitted his candidacy for the parliamentary elections (Azerb. Milli Majlis) of the Azerbaijan Republic (AR) from the 34th Khatai District of Baku city, which were scheduled on 9 February 2020. Having collected a lot of facts demonstrating violation of electoral rights of the Azerbaijan Republic citizens on the day of the elections, Samad Rahimli appealed to the Central Election Commission (CEC) of the AR with a complaint and demand to annul the results of the 34th Khatai District and request the CEC to hold re-election.

The complaint was justified by massive falsifications and frauds discovered during the electoral campaign. According to the independent observers’ data, the attendance at the 34th electoral district was only 7.5%. Yet, the CEC results showed a participation rate of 37.5% in that district. In a mean time, the CEC hasn’t justified that substantial difference. In his complaint, Samad Rahimli indicated that because of the low voters’ attendance, it was organized the “carousels ” in favour of the pro-government candidate. The polling station was visited by the citizens who were not registered in that district. It was intentionally created all those circumstances to falsify the elections. Independent observers were able to take photos and video footage of the falsifications.

A pile of ballots in favor of the pro-governmental candidate Mikhail Zabelin was found at the 5th polling station. At the majority of polling stations, the members of the election commission refused to fill in and issue protocols to the observers.

At the 19th polling station, there was not either the chairman or secretary of the election commission, there were no any protocols and ballots, and the seal was lost.  On the pretext of losing the seal the officials of the commission refused to draw up protocols and issue them to the observers.

The observers’ comments were not taken into account, and the members of the commission tried to put pressure on them. The observers drew up numerous acts at the polling stations, indicating violations of the Electoral code. At the 22nd polling station, the chairman of the election commission prohibited the observers to take video and photo shots.

On 11 February 2020, Samad Rahimli filed a complaint with the District Election Commission (DEC), enclosing all the acts, photos and videos showing that the voting results had been falsified. He asked the DEC to invalidate the election results in that district and annul them. Samad Rahimli also filed a petition to inspect the video surveillance cameras installed at the district polling stations. However, the DEC did not thoroughly and independently investigate the facts submitted by the candidate for deputies. On 13 February 2020, the District Election Commission issued a decision to reject Samad Rahimli’s complaint.  The DEC did not ensure Samad’s participation in the investigation process, and a copy of the decision was provided only after the demands for the decision to be issued. Moreover, a copy of that decision was issued to S. Rahimli without any signature and seal. Samad Rahimli, not accepting the DEC decision, filed a complaint against the DEC decision on 13 February 2020, with the CEC of Azerbaijan Republic on 14 February 2020. On 17 February 2020, the CEC of Azerbaijan Republic made a decision to partially satisfy the complaint of Samad Rahimli. The election results at 7 polling stations were declared null and voided. The CEC justified their decision due to the fact that there were significant differences between the protocols submitted directly from the Precinct Election Commissions (one by one) to the CEC and those received at once by the CEC from the same Commissions. The decision of the CEC was presented to Samad Rahimli on 18 February 2020.

Not having agreed with the decision of CEC AR, S. Rahimli filed a claim to the Baku Court of Appeal. In his lawsuit, he asked to annul the election results of the entire 34th electoral district from which he had run.

According to the Article 19.3 of the Azerbaijan Republic Electoral Code, the chairman (of the Central Election Commission) as well as his deputy and two secretaries are to be elected at the first meeting of the Election commission by means of open voting. Prior to the election of the Electoral Commission chairperson, the oldest member of the Commission shall preside at the first Commission session in case of the chairperson’s absence. The Chairperson of the Election Commission is a representative of a political party that constitutes the majority of deputies in the Milli Majlis, each of the secretaries represents a party that constitutes the minority of deputies and independent deputies in the Milli Majlis.

The Article 19.5 of the Azerbaijan Republic Election Code states that the meeting of the election commission is summoned by the Chairman, as well as at the request of at least 1/3 of the commission members with voting rights.

According to the Article 19.10 of the Azerbaijan Republic Election Code the election commission meeting is considered to be authorized with the participation of 2/3 of the commission members with the voting right.

In the Articles 28.2., 34.3. and 39.3. of the Azerbaijan Republic Election Code, it is specified that any level of the election commission decisions are taken by 2/3 of the commission members participating in the meeting.

In the Article 112.4 of the Electoral Code of the Azerbaijan Republic states: “If the infringement described in the complaint can be considered a criminal action according to the Criminal Code of the Republic of Azerbaijan, the relevant election commission can apply to relevant public prosecutor’s bodies and make decisions regarding elimination of the shortcomings or infringements indicated in the complaint. The Central Election Commission must make a grounded decision on consideration of each complaint. If the investigation of the complaint indicates the likelihood of a crime, the prosecuting body should be informed about it. The relevant prosecuting body must consider the complaint within 3 days.

Despite the utter violations recorded during the electoral process at the polling stations, the respective superior commissions not only failed to take into account the tremendous violations, but also failed to report the existence of criminal elements in the activities of commission members.

According to the Article 112.8 of the Electoral Code of the Azerbaijan Republic, the election commission shall have the right to receive citizens’ and officials’ information and to require necessary documents and materials.

According to the Article 106.4 of the Electoral Code of the Azerbaijan Republic, if there are doubts on the validity of a vote, the Precinct Election Commission shall vote to determine if the vote is considered valid. If a decision is made to consider the vote invalid, the reasons for the decision shall be recorded on the reverse side of the ballot paper. Such a record should be approved by the signatures of the chairperson and secretary of the Precinct Election Commission. Invalid votes shall be packed separately.

The second copy of the protocol plus the cut-off left corners of these ballots, scraps of invalid ballots as well as the lists of those who observed the voting and counted the votes specified in the Articles 40.2 and 40.4 of the Electoral Code shall be kept with the secretary of the Precinct Election Commission until the end of the commission’s activity (the Article 106.8 of the Electoral Code of the Azerbaijan Republic).

According to the Article 170.2 of the Electoral Code of the Azerbaijan Republic, “The District Election Commission or the Central Election Commission considers the elections in a single-mandate constituency invalid in the case (Article 170.2.1) of the violations of law committed in the constituency during the voting or determination of the voting results fails to establish the will of the voters”.

Besides the above-mentioned norms of the Electoral Law, the norms of the Constitutional Law were infringed. Thus, under the Article 56 (I) of the Azerbaijan Republic Constitution, Azerbaijani citizens have the right to elect and be elected to the state bodies and also  participate in the referendum.

According to the Universal Declaration of Human Rights, the Article 21(1), everyone has the right to take part in the governance of their own country, directly or through freely chosen representatives. The Article 21 (3) of the Universal Declaration of Human Rights states that: “The will of the people shall be the basis of the authority of government; this will shall be expressed in periodic and genuine elections which shall be by universal and equal suffrage and shall be held by secret vote or by equivalent free voting procedures”.

In the Paragraph 3 of the Additional Protocol to the European Convention for the Protection of Human Rights and Fundamental Freedoms said, the High Contracting Parties undertake to hold free elections on a basis of secret ballot at reasonable intervals under conditions that will ensure the citizens’ free expression of will electing their legislative bodies.

According to the Article 13 of the European Convention on Human Rights, everyone whose rights and freedoms as set forth in this Convention are violated shall have an effective remedy before a national authority notwithstanding that the violation has been committed by persons acting in an official capacity.

The European Court of Human Rights (ECHR) points out that at first sight the right provided in the Paragraph 3 of the Protocol No. 1 differs from the other rights provided in the European Convention and its Protocols, as this paragraph refers more to the obligation of the High Contracting Parties to ensure the free will of the people than to specific rights or freedoms. However, the Court found that it ensured individual rights, including the right to elect and be elected (Paragraphs 46-51 of the judgment of the European Court of Human Rights in the case of Mathieu-Mohin and Clerfayt v. Belgium on March 2, 1987).

These rights are not of an absolute nature. Since they are recognized in the Paragraph 3 of the European Convention, but are not specified, much less defined, there is a possibility for implicit restrictions (the Paragraph 52 of the above decision).

The OSCE and the Venice Commission have indicated that the organisation of election commissions, as it is stipulated in the National law, in practice leads to the management of the electoral process by pro-government administration forces and to the adoption of important decisions by them. Both the OSCE and the Venice Commission have repeatedly recommended to adopt such a formula, which would exclude the advantage of pro-Government forces in organizing the election commissions; however, these recommendations were not followed during the elections.