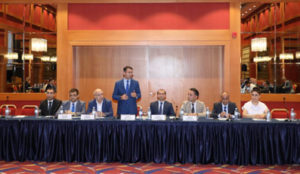 The State Committee of the Azerbaijan Republic on Work with Religious Organizations (SCWRO) Committee held a conference in Baku on 23 September entitled “Religious Expert Analysis: Law and Practice”, it announced on its website the same day. Also taking part were publishers, as well as representatives of the Spiritual Values Promotion Foundation (which is subject to the State Committee) and the Caucasian Muslim Board.

Deputy Chair of the SCWRO Gunduz Ismayilov told the conference that “harmful literature” was rarely encountered because of the law mandating censorship and the  close cooperation between the State Committee and publishers and authors.

Nahid Mammadov, the head of the State Committee’s “Religious Expert Analysis” (Censorship) Department, claimed the state censorship was in line with international practice. He claimed that censorship also protected against piracy and tax evasion.

He maintained that the control stickers enhance trust in religious literature. “Every citizen reads religious literature with the appropriate sticker and refuses any other literature offered to them,” the State Committee website cited him as saying. “It also means that our citizen, without knowing the contents of the book, will be able to determine whether the text of the book is malicious thanks to the control sticker.”

Nahid Mammadov also told the conference that 42 shops across the country have the required state license to sell religious books and items, though more than 100 exist. He complained that the unlicensed shops “create certain problems”, though he does not appear to have specified what these are.