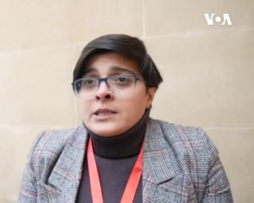 Analysis of violation of law during Rabiya Mammadova’s judicial proceedings

The municipal elections were held in Azerbaijan on 23 December 2019. One of the candidates from the 10th electoral district of Binagadi municipality of Baku city was Rabiya Mammadova, a young activist of civil society. The acting chairman of the municipality, Matanat Nasibova, ran from the same district.

Rabiya Mammadova had participated in a number of campaigns to protect women’s rights; she had been repeatedly detained by the police. R. Mammadova is known for her anti-government views and she has always criticized the authorities’ politics. Besides, her active work on social networks also attracts public attention.

Being a candidate for the 10th electoral district of Binagadi municipality of Baku city, Rabiya Mammadova carried out an election campaign in this district that raised public attention to the municipal elections whereas in Azerbaijan they are not paid much attention to any of these elections.

On 23 December 2019, on the voting day, Rabiya Mammadova was at the polling stations where she recorded the voting process violations.

Rabiya Mammadova fixed on video so-called “merry-go-round” (multiple voting of the same people) regularly used for the election results falsification in Azerbaijan, and she stated that everyone who had participated in “merry-go-round” were dishonest people. The Chairman of Binagadi district municipality, Matanat Nasibova, interpreted these words as an insult in her address and brought a lawsuit against Rabiya Mammadova in Binagadi district court of Baku city. Matanat Nasibova pointed out that the above statements hurt her honour and dignity. M. Nasibova asked the court to fine R. Mammadova for 1.000 Manat and oblige the defendant to apologize.

This video recording was demonstrated during the court hearing on 9 January 2020. Speaking at the trial, R. Mammadova’s lawyer and representative Zibeyda Sadigova said that Rabiya Mammadova didn’t specifically address the word “dishonest” to Matanat Nasibova. Mammadova just expressed her opinion about the people who falsified the election by using “carousel” and the “carousel” participants.

The trial continued and on 30 January, the judge proposed to conclude the trial with a friendly agreement. The plaintiff’s side demanded an apology from Rabiya Mammadova who refused to do so, justifying her refusal by the fact that she had expressed her personal opinion that she would not going to change.

Following the municipal elections, the plaintiff, Matanat Nasibova was re-elected a member of the Binagadi district municipality of Baku city.

Rabiya Mammadova has submitted her candidacy for the snap parliamentary elections, which were scheduled for 9 February 2020.

On 13 February 2020, the Binagadi District Court of Baku City ruled to partially satisfy the claims. The court ordered Rabiya Mammadova to bring apologies to Matanat Nasibova for the information circulated by the defendant on Facebook social network.

The court decision is illegal and unjustified. The guarantees that the registered candidate has are listed in the Article 70 of the Election Code of the Azerbaijan Republic. These guarantees are preserved until the official publication of election results according to the Article 70.1 of the Electoral Code of the Azerbaijan Republic.

By virtue of the Article 70.4 of the Election Code of the Azerbaijan Republic, within the stipulated period of time specified in the Article 70.1 of the Code, a registered candidate cannot be criminally charged for the committed actions without the relevant prosecutor’s authorization, cannot be arrested and subjected to administrative penalties imposed by the court.

Caught in a crime scene, a registered candidate may be arrested, if it is authorized or decided by the district procurator or court. In doing so, the electoral commission where the candidate is registered must be notified without delay.

Rabiya Mammadova, as a registered candidate in the municipal elections, had been brought to justice, and she had not been convicted in her favour.

The Article 219 of the Election Code of the Azerbaijan Republic states ”A registered candidate to a municipality may be subject to prosecution in the manner prescribed by the Article 70.4 of this Code only with the respective district prosecutor’s permission”.

The Article 71 of the Election Code of the Azerbaijan Republic lists the conditions to be met by the registered election candidates.  They are as follows:

71.1.1. Respect the rights of other registered candidates, independently and freely express their political ideas and views during the election campaign;

71.1.2. Respect the rights of other registered candidates, political parties, voters and public organisations;

71.1.3. Do not prevent other registered candidates from establishing free communication with voters.

As evident from the case, Rabiya Mammadova expressed her assessment of the electoral process based on the video footage taken on the election day. Moreover, there are a number of reports of the international and local organizations that monitored the elections, showing multiple violations of the election process, a large number of falsifications of the voting results by means of “carousels”. The municipal elections on 23 December 2020 were not an exception. The “carousel” was also observed in other electoral districts.

According to the Article 47 of the Azerbaijan Republic Constitution:

According to the Article 50 of the Azerbaijan Republic Constitution everyone has freedom to legally seek, receive, transfer, produce and circulate any information.

With regard to Rabiya Mammadova, the right to freedom of speech has been violated, and the court has decided to force her to abandon her thoughts and beliefs based on evidence.

The right to freedom of expression is also enshrined the norms of international law, in addition to the Constitution of the Azerbaijan Republic. Thus, according to the Article 10(1) of the European Convention for the Protection of Human Rights and Fundamental Freedoms, everyone has the right to freely express his/her opinion. This right includes freedom to hold his/her opinion and freedom to receive, impart information and ideas without any interference from public authorities and regardless of state borders.

The Article 19 of the International Covenant on Civil and Political Rights states:

(a) To respect the rights and reputations of others;

Rabiya Mammadova, expressing her opinion, neither mentioned any names nor insulted anyone. In this case in means that there is no subject. For this reason, Matanat Nasibova had no legal right to bring a suit against R. Mammadova.

Numerous precedents of the European Court of Human Rights (ECHR) also protect the right to freedom of expression for everyone.

In the Judgment of the ECHR concerning Obershlik v. Austria of 23 May 1991, the paragraph 57 states, “Freedom of expression as defined in the Article 10 (1) of the European Convention for the Protection of Human Rights and Fundamental Freedoms constitutes one of the fundamental pillars of democratic society, a fundamental condition for its progress and for the self-fulfillment of each of its members. Upon compliance with the requirements of p. 2 freedom of expression embraces not only “information” or “ideas” that are found favourably or regarded as harmless or neutral, but also those that offend, shock or disturb. These are the requirements of pluralism, tolerance and liberalism, without which there is no “democratic society”.

As mentioned above, Rabiya Mammadova published a video with a “carousel” during municipal elections when public attention was focused on the elections. The elections were discussed on social networks and the press published videos and photos of violations.

We draw your attention to the content of the paragraph 59 of the ECHR judgment in the case Oberschlik v. Austria “The limits of permissible criticism of any politicians are wider than those of individuals. Unlike the latter, the former must also show a greater degree of tolerance for the close attention of journalists and the entire society, for each word and action. There is no doubt that p. 2 , the Article 10 of the European Convention for the Protection of Human Rights and Fundamental Freedoms protects the reputation of each individual, i.e. it also applies to politicians, even when they do not act as individuals; but in such cases, the counterbalance to such protection is the public interest towards open debate on political issues”.

Matanat Nasibova, the current Chairman of the Baku City Binagadi District Municipality, is a public figure, which enhances a great level of public interest. The municipal elections were widely discussed and evoked interest in the public. The press recorded and publicized the evidence and facts collected by the observers during the election process.

All above points to the fact that with regard to Rabiya Mammadova, a candidate for the municipal elections, there was a violation of her parliamentary immunity as well as the right to freedom of expression of thought.