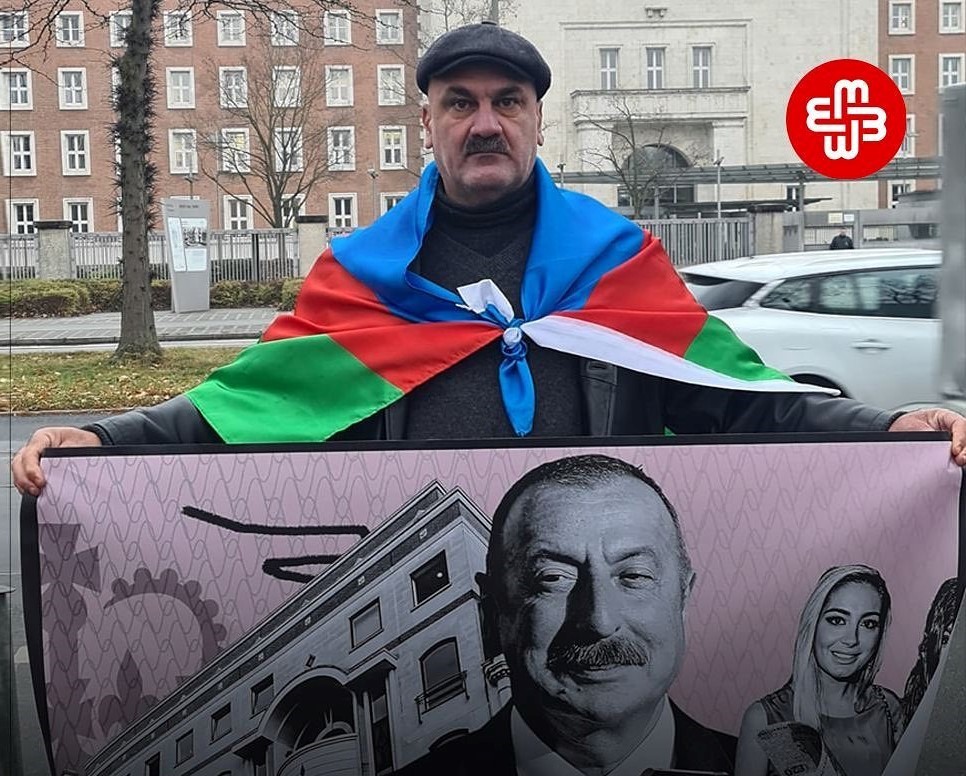 Analysis of violation of law during Ziya Ibrahimov’s judicial proceedings

The applicant: Bakhtiyar Quliyev, an investigator of the Imishli Regional Department of the Azerbaijani Ministry of Justice

A person who brought charges before the court: Shamil Shammadli, a Prosecutor of the Department on Monitoring the Implementation of Laws in the Investigation, Inquiry and Investigative Activities in the Justice, Customs and Tax Authorities at the Prosecutor General’s Office of the Azerbaijan Republic

Ziya Ibrahimov is a functionary within the Bilasuvar branch of the Popular Front Party of Azerbaijan (PFPA). In 2018, he was particularly active and fought against falsification in the course of the presidential elections. He was therefore persecuted by the authorities and forced to flee Azerbaijan. Then, Ziya Ibrahimov went to Germany and applied for political asylum there. However, on 19 May 2022, Mr. Ibrahimov was deported from Germany back to Azerbaijan.

According to the Azerbaijani Ministry of the Interior Affairs, Ziya Ibrahimov has been wanted since 2019 due to his failure to pay alimonies, and that was the reason of his deportation from Germany.

Upon his return from Germany on 19 May, 2022, Ziya Ibrahimov was detained right at the airport. He was charged with committing an administrative offence under the Article 528.1 (Failure to comply with the demands of an enforcement official in connection with the fulfillment of judicial and other bodies) of the Administrative Offences Code of the Azerbaijan Republic, and arrested for a period of one month.

On 22 June 2022, a criminal case was brought against Ziya Ibrahimov under the Article 306.1 (Malicious non-execution of a judgment, decision, ruling or order of the court that has entered into force, or interfering with their execution) of the Criminal Code of the Azerbaijan Republic (AR Criminal Code).

On 5 May 2017, Ziya Ibrahimov had to pay the alimony of 18.500 manat, 3.500 manat according to the judgment of Shirvan Appeal Court on 28 January 2018, and also based on the judgment of Qaradag District Court of 8 May 2015, he had to pay another 9.000 manat. Therefore, in accordance with the ruling of the Bilasuvar District Court of 20 May 2022, Ziya Ibrahimov was subjected to administrative custody for a period of 1 month.

On 22 July 2022, the Baku City Yasamal District Court issued a ruling: to satisfy the investigator’s petition and the prosecutor’s submission to arrest Ziya Ibrahimov and apply a preventive measure of detention for a period of 2 months and 26 days against him.

The court verdict is unlawful and unjustified. Like 95 per cent of all arrest warrants, this ruling does not differ from the others. It does not specify the grounds and their validity that should justify the court’s order.

One of the reasons for the arrest the court cited was the probability of absconding from the trial and investigation. As mentioned above, Ziya Ibrahimov was deported from Germany to Azerbaijan. That means that the law-enforcement authorities have been informed about it, which means that the probability of absconding is equal to almost zero. In that case, it would have been sufficient to confiscate Ibrahimov’s passport, without which he would not have been able to cross the border of the country.

The Article 2 of the Law of the Azerbaijan Republic Exit, Entry and Passports stipulates,

In accordance with the procedure established by this Law a citizen’s right to exit and enter the country shall be exercised only on the basis of a passport of a citizen of the Azerbaijan Republic and a permit to enter a foreign country such as a visa issued in accordance with international treaties.

The official revocation of the passport could be a guarantee to ensure that the accused did not abscond abroad, otherwise it would be a reason for choosing an alternative preventive measure other than arrest.

Especially since the offence of which Ziya Ibrahimov was accused did not entail any public danger. The individual did not cause any harm to society, and in this case he should not be deprived of his liberty.

According to the Article 154.2 of the Code of Criminal Procedure of the Azerbaijan Republic, restrictive measures may be the following:

Apparently, an arrest is the harshest preventive measure as it completely deprives the accused of his liberty.

In addition, the Article 155.2 of the Code of Criminal Procedure of the Azerbaijan Republic states that in resolving the question of the necessity for a restrictive measure and which of them to apply to the specific suspect or accused, the preliminary investigator, investigator, prosecutor in charge of the procedural aspects of the investigation or court shall bear in mind:

According to this Article, the gravity, nature and circumstances of the offence are the most important factors to be taken into account when imposing a preventive measure in the form of detention. However, they had not been considered by the court.

According to the Article 157.5 of the Code of Criminal Procedure of the Azerbaijan Republic,

When examining the question of arrest as a restrictive measure, the court, if it decides that there is no need to isolate the accused from society by detaining him on remand, shall have the right to substitute house arrest for arrest. The court may simultaneously make its decision about arrest and resolve the matter of releasing the accused from arrest by granting bail, and if this release is considered possible, it shall determine the amount of bail. The court may review its decision about the inadmissibility of bail and the amount of bail at the request of the defence.

In addition to the above-mentioned grounds, the court ruling also pointed out that Ziya Ibrahimov had been arrested on the grounds of the charge that imposed a sentence of more than 2 years’ imprisonment. While it is true that the Article 155.3.1 of the Code of Criminal Procedure of the Azerbaijan Republic specifies this ground, we should again emphasize that the imposition of a preventive measure cannot be justified solely by the severity of the conviction. Besides, in this case it would violate the principle of presumption of innocence, since the offence did not entail any public danger.

The court did not consider the possibility of applying a preventive measure other than arrest and failed to specify the grounds why an alternative preventive measure could not be applied to the defendant. Instead, the court only took into account the investigator’s motion and the prosecutor’s submission, and imposed the preventive measure requested by the law-enforcement authorities. At the same time, the defence arguments were not either considered or properly assessed by the court.

All of the above are clear violations of the right to liberty guaranteed in both National and International laws.

According to the Article 28 of the Constitution of the Republic of Azerbaijan,

The Article 14 of the Code of Criminal Procedure of the Azerbaijan Republic state,

The Article 5 (1) of the European Convention for the Protection of Human Rights and Fundamental Freedoms, Article 5(1), also protects the individual’s personal liberty:

Individual freedom must be the rule while a deprivation of liberty prior to a judgment is the obvious exception. Whilst the existence of suspicion that prompted the detention was a condition for the person’s lawful, it was not sufficient to justify, after a certain lapse of time, as an extension of detention. The detention is justified, only if the particular grounds reveal the presence of a public interest overriding, notwithstanding the presumption of innocence, a personal liberty.

In this case, Z. Ibrahimov’s detention was not justified insofar as respect for his personal liberty overrode the public interest.

The Court failed to consider all the circumstances that would enable the public interest element that, in its turn, would justify an exception to the general rule respecting the individual’s liberty. The European Court of Human Rights (ECHR) judgment in the case of Lettellier v France of 29 June, 1991 states,

“The National Judicial Authorities must first ensure that the length of the pre-trial detention of an accused does not exceed a reasonable limit in each particular case. To that end, they must consider all the circumstances that might justify, in the light of the presumption of innocence, exceptions from the general rule concerning respect for individual liberty and take them into account when determining the request for release”. https://hudoc.echr.coe.int/eng#{%22fulltext%22:[%22Letellier%20v.%22],%22documentcollectionid2%22:[%22GRANDCHAMBER%22,%22CHAMBER%22],%22itemid%22:[%22001-57678%22]}

As mentioned above, Ziya Ibrahimov had already been charged with administrative offences and sentenced for a month. After that, the authorities should have granted him time to implement the court decision for non-compliance with it. However, as soon as the administrative detention period was over, he was immediately brought up on criminal charges and arrested. This indicates that the objective of the law enforcement authorities has not been to ensure the implementation of the court decision, but actually to incarcerate him. The administrative sanction was merely a procedural measure that the authorities sought to comply with.

Protocol No. 4 of the to the Convention for the Protection of Human Rights and Fundamental Freedoms state.

No one shall be deprived of his liberty merely on the ground of inability to fulfil a contractual obligation.

Despite the fact that the Criminal Code of the Azerbaijan Republic listed non-compliance with a court decision as an offence and stipulated custodial sentences, the Protocol 4 under the European Convention for the Protection of Human Rights and Fundamental Freedoms prohibits imprisonment for non-compliance with a contractual obligation.

According to the Article 151 of the Constitution of the Azerbaijan Republic,

Upon his return from Germany, Ziya Ibrahimov was not provided an opportunity to pay his debts. Instead, two punitive measures have been imposed on him. Ziya Ibrahimov’s current imprisonment is nothing else but a punishment for his active political position and activities. One of the fundamental rights of a democratic society, the Right to Freedom, has been violated in relation to Ziya Ibrahimov.