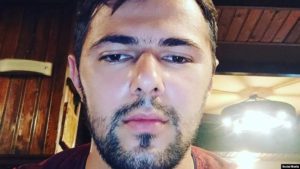 Analysis of violation of law during Maqsud Aliyev’s judicial proceedings

The person against whom an administrative record was issued: Maqsud Aliyev

The person who drew up the administrative report: Vusal Hidayatzade, a Lieutenant serving as a district police officer at the 40th Police Station of the Binagadi District Police Directorate

Maqsud Aliyev, born in 1995, a university graduate, is a politically active member of the youth movement who openly expresses his critical position on social networks and at a range of events focusing on the political situation in Azerbaijan. Previously, he was a member of the opposition D18 Movement.

According to the police version, Maqsud Aliyev was detained on the following grounds: At about 19:35 on 16 August 2022, M. Aliyev, used cursed language when he was in the 28 May settlement of Binagadi district however, these obscene words were not addressed to anyone. The police officers urged him to order but he did not follow their legitimate demands.

An administrative report was made against M. Aliyev for allegedly violating the Article 535.1 (Failure to obey the legitimate demands of a policeman) of Azerbaijan’s Code of Administrative Offences.

The policeman, Vusal Hidayatzade, who drew an administrative protocol against Maqsud Aliyev, interrogated by the court, said that on 16 August 2022, M. Aliyev cursed, for which he was called to order but did not obey the legitimate demands of the police officer.

The Court considered M. Aliyev’s testimony as a tactic of defence, with the help of which he tried to avoid the administrative punishment.

On 17 August 2022, the Baku City Binagadi District Court found Maqsud Aliyev guilty of committing an administrative offense and sentenced him to 30 days of administrative detention.

The court verdict is unlawful and unjustified. Like other hundreds administrative cases against political and civil society activists, this one was no exception. All the rulings seem to have been copy-matched from one another. The same phrases, similar arguments and the absence of any evidence whatsoever.

In the ruling against M. Aliyev, there was only one person who testified in the court, a district police officer Vusal Hidayatzade. Therefore, his testimony did not differ from the administrative report that he had drawn up himself.

The court ruling also states that M. Aliyev used obscene language in “a public gathering place”. Despite the police officer’s argument, not a single person who, according to the police, was nearby and heard the swearing was called as a eyewitness in the case. There is no evidence against Maqsud Aliyev in the case, other than the administrative report and V.Hidayatzade’s testimony.

Nevertheless, the Court found the police officer’s testimony irrefutable, whereas M.Aliyev’s testimony was found to be an avoidable one.

One of the principles of administrative proceedings is the presumption of innocence.

According to the Code of the Azerbaijan Republic On administrative violations,

8.2. The person being called to account for administrative violation has not to prove his guiltlessness.

8.3. Doubts regarding the guiltiness of the person called to account for administrative violation shall be resolved in his favour.

8.2. The Article 8.2 state, that the person being called to account for administrative violation has not to prove his guiltlessness. Despite the existence of this norm, and in accordance with the most important principle of any legal procedure (the Presumption of Innocence), the police officer failed to prove M. Aliyev’s guilt, because he did not provide the court with any evidence. Either, not a single witness statement has been submitted to the court.

Under the Article 75 of the Administrative Offences Code, in a case of administrative misconduct, it should be determined:

In accordance with the Article 76.1 of the Code on Administrative Offences, the proofs in an administrative offence case shall be any factual information on the basis of which the judge, the authorized body (official) determine the existence or absence of an administrative offence, guilt of the perpetrator and other circumstances relevant to the proper adjudication of the case. These data shall be ascertained through physical items of evidence, explanations of the perpetrator, testimonies of the victims, witnesses, other documents, depositions of special technical means, experts’ conclusions, the protocol of administrative offence, and other reports as defined in the Code.

The Article 535.1 of the Administrative Offences Code, which M. Aliyev was charged with violating, stipulates the penalties (punishments). Thus, it states that for a violation of the Article the punishment shall be a fine of two hundred manats imposed on individuals, and if, in the circumstances of the case, taking into account the offender’s personal characteristics, the application of these measures would be deemed insufficient, an administrative detention for a period of up to one month.

Apparently, the Article stipulates an alternative penalty that is not related to arrest, i.e. an administrative fine. The Court even did not consider the option of imposing a non-custodial administrative sanction. Furthermore, there was no evidence provided in the ruling that a fine would have been insufficient. When imposing an administrative charge, the Court did not take into account either M. Aliyev’s personality or his university education and advanced cultural level.

According to the Article 28 of the Constitution of the Republic of Azerbaijan,

The International Juridical Norms also point to the Right to Liberty. According to the Article 5 (1) of the Convention for the Protection of Human Rights and Fundamental Freedoms,

This Norm guarantees a fundamental right among the most important rights: the right to liberty and personal inviolability. It is an inalienable right that a person cannot renounce. The guarantees enshrined in the Article 5 are applicable to everyone. Any individual either at liberty or in custody has this right.

The judgment of the European Court of Human Rights (ECHR) in the case of Lawless v Ireland dated 14 November, 1960, states that

In the judgment of the European Court of Human Rights in the case of Kurt v. Turkey dated 25 May, 1998, it is written:

The Court emphasizes the fundamental importance of guarantees of individuals’ rights against unlawful arrest or detention by the authorities in a democratic society, as set out in the Article 5. That is why the Court has repeatedly stressed in its judgments that any deprivation of liberty must be exercised not only in accordance with the substantive procedural provisions of a National Law but also comply with the objectives laid down in the Article 5, i.e. to protect the individual from arbitrariness of the authorities. This urge to protect the individual against any form of abuse committed by the State authorities is corroborated by the fact that the Article 5 § 1 narrows down the grounds on which a person may be lawfully deprived of his liberty, although these grounds cannot be broadly interpreted since they are exceptions within the fundamental guarantees of a person’s individual liberty.

Thus, the subjective, biased and unfair judicial consideration of Maqsud Aliyev’s administrative case has resulted in the violation of a fundamental right, the Right to Freedom.