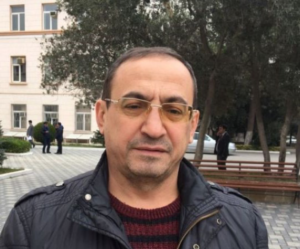 Analysis of violation of law during Mammad Ibrahim’s judicial proceedings

The person who requested the arrest: Askar Iskandarov, an investigator of the Investigative Department on Particularly Grave Crimes of the General Prosecutor’s Office of the Azerbaijan Republic

The Prosecutor who carries out the procedural control over the preliminary investigation: Sattar Rzayev, a Senior prosecutor of the Department for Supervision over Investigation at the General Prosecutor’s Office of the Azerbaijan Republic.

Mammad Ibrahim has been a member of the Popular Front of Azerbaijan (PFA) since 1989, and since 2012 he has been the party chairman’s advisor and a Board member. On 30 September 2015, it was initiated a criminal case against M. Ibrahim at the Police Department of the Baku Narimanov district under the Article 221.1 (Hooliganism, that is the deliberate actions roughly breaking a social order, expressing obvious disrespect for a society, accompanying with application of violence on citizens or threat of its application, as well as destruction or damage of another’s property) of the Criminal Code of the Azerbaijan Republic. Later, this Article was reclassified to the Article 221.2.2 (Hooliganism committed with resistance to representative of the authority, acting as on protection of a social order or stopping infringement of a social order or with resistance to other person) of the Criminal Code of the Azerbaijan Republic. On 15 March 2016, the Baku City Nariman District Court found M. Ibrahim guilty of committing a crime and sentenced him to 3 years of imprisonment. The term of his arrest expired in September 2018, but a day before the expiration of his sentence, M. Ibrahim was charged again with committing a crime under the Article 317-2.1 (Threat on application of violence concerning employees of criminal – executive establishments or investigator isolators, and also concerning condemned with a purpose to prevent his correction or from revenge for execution of public duties by him) of the Criminal Code of the Azerbaijan Republic. On 10 January 2019, the Baku City Surakhani District Court found M. Ibrahim guilty and sentenced him to 5 months and 22 days of imprisonment.  On 13 February 2019, the Baku Court of Appeal altered the sentence of the first instance court from 10 January 2019, and reduced the term of imprisonment by 1 month and 6 days. On 13 February 2019, that term was expiring, so Mammad Ibrahim was released from the courtroom.

On 13-14 July 2020, there were the violent fights between two sides in the town of Tovuz on the Azerbaijani-Armenian border. As a result of the hostilities, eleven Azerbaijani military servicemen were killed, including the General Polad Hashimov and the Colonel Ilqar Mirzoyev.

As a gesture of solidarity with the killed soldiers, thousands of people demonstrated in central Baku in the evening of 14 July. Those people walked a long way from the Koroglu metro station to the city center. From there, the demonstrators kept walking to the presidential building, and then to the parliament. A small group of unidentified people stormed the parliament building, where they caused damage to the state property.  The video, captured at the demonstration by journalists, clearly showed some employees of the State Security Service, in particular Rauf Khalafov, a Major General of the State Security Service and the President’s cousin, who was one of the first entering the Azerbaijani parliament building, the doors to which were unexpectedly opened at night on 15 July. The video clearly reveals that the demonstrators, including SSS officers, having wandered through the lobby of the Parliament they left the building.

As early as the next day, the arrests of opposition activists began. Those arrested were brutally beaten and demanded to testify about the forthcoming coup. Dozens of citizens were brought to the administrative charges and received from 15 to 60 days of arrest.  The criminal cases were initiated against 36 individuals under the Articles 186.2.1 (Deliberate destruction or damage of another’s property which caused significant damage to a victim committed with causing damage to a victim in the large size), 233 (Organization of actions promoting infringement of a social order or active participation in such actions), 278.1 (Violent capture power or violent deduction power in infringement of the Constitution of the Azerbaijan Republic, as well as directed on violent change of constitutional grounds of the states), as well as 315.1. (Application of violence, resistance with application of violence concerning the representative of authority in connection with performance of official duties by him or application of the violence not dangerous to life or health concerning his close relatives, as well as threat of application of such violence) of the Criminal Code of the Azerbaijan Republic.

On 26 July 2020, Mammad Ibrahim was detained on his way to his son Mehdi Ibrahim, who was also arrested after the events of 15 July 2020. Mammad Ibrahim’s son Mehdi was accused of committing a crime under the Article 139-1.1.  (Violation of anti-epidemic regime, and sanitary, hygiene and quarantine regimes causes spread of diseases or creates real danger of spread of diseases) of the Criminal Code of the Azerbaijan Republic. Mehdi Ibrahim was arrested for 3 months.

Whereas the detained Mammad Ibrahim was charged with committing crimes under the Articles 186.2.1, 233, 278.1 and 315.1 of the Criminal Code of the Azerbaijan Republic.  Mammad Ibrahim faces up to 20 years in prison.

On 28 July 2020 the Nasimi District Court of Baku City issued a ruling on imposition of a restraint measure against Mammad Ibrahim in the form of imprisonment for a period of 4 months.

The court verdict is unlawful and unjustified. According to the indictment, on 15 July 2020, Mammad Ibrahim was the organizer of illegal actions. Regarding Mammad Ibrahim, it was imposed the strictest measure.

According to the Article 28 of the Constitution of Azerbaijan Republic:

The right to freedom is also ensured by the Article 14 of the Criminal Procedure Code of the Azerbaijan Republic. This article states:

14.1. The right to liberty may be limited only in cases of detention, detention on remand

or imprisonment in accordance with the law.

14.2. Nobody may be detained or arrested other than on the grounds provided for in the

Code and other laws of the Azerbaijan Republic.

The Criminal Procedure Law contains 10 different preventive measures. The accused may be subject to arrest, house arrest and bail. The court decision does not specify the reason for choosing the strictest preventive measure against Mammad Ibrahim. The ruling also fails to indicate why the court did not choose a non-arrest measure (bail or house arrest).

According to the Article 155.1 of the Code of Criminal Procedure of the Azerbaijan Republic, restrictive measures may be applied by the relevant preliminary investigator, investigator, prosecutor in charge of the procedural aspects of the investigation or court when the material in the prosecution file gives sufficient grounds to suppose that the suspect or accused has:

Let us consider the grounds, which the court stated in its decision, as justification for the application of a preventive measure in the form of arrest. The grounds listed in the ruling are as follows:

The grounds indicated in the list of justifications are almost all of those listed in the criminal procedure law. However, none of them was substantiated by the facts or arguments. The Court merely provided a dry list of the grounds set out in the law.

Article 157.1 of the Code of Criminal Procedure of the Azerbaijan Republic states, that in accordance with the principle of the presumption of innocence, if the connection of the person to the offence committed is not proven, he may not be arrested or unnecessarily detained on remand.

The investigation believes that on 15 June 2020, it was Mammad Ibrahim who organized the illegal actions by means of the WhatsApp system as well as the social network Facebook. The lawyer’s petition to provide the data stored on social networks was rejected by the investigator. This means that the investigation did not have sufficient grounds for Mammad Ibrahim’s involvement in the alleged crimes. Besides, Mammad Ibrahim has been criminally prosecuted on several occasions and a preventive measure has been taken against him, but he has never violated the procedural law.

The right to freedom is enshrined not only in the National legislation but also in the International law. The arrest of Mammad Ibrahim violated the European Convention for the Protection of Human Rights and Fundamental Freedoms, Article 5(1) (Paragraph C), which guarantees an individual’s right to freedom and security.

According to the Article 5:

(C) the lawful arrest or detention of a person effected for the purpose of bringing him before the competent legal authority on reasonable suspicion of having committed an offence or when it is reasonably considered necessary to prevent his committing an offence or fleeing after having done so.

Article 9 of the Universal Declaration of Human Rights states: “No one shall be subjected to arbitrary arrest, detention or exile”. The Article 9 of the International Covenant on Civil and Political Rights also prohibits arbitrary arrest and unlawful detention. These articles, in proclaiming the right to freedom, refer to individual freedom in its classical sense, e.g. a person’s physical freedom.

The numerous rulings of the European Court of Human Rights (ECHR) prohibit arbitrary arrest. Thus, the European Court in the case of Lawless v. Ireland, the Judgment of 1 July 1961, states, “The purpose of the Convention is ‘to protect freedom and personal integrity from unlawful arrest and detention’. “http://hudoc.echr.coe.int/app/conversion/pdf/?library=ECHR&id=001-57516&filename=001-57516.pdf&TID=epcmxtpacx

“The Convention refers primarily to the obligation to respect the norms of National law, but also requires that any measure of deprivation of liberty must be consistent with the purpose of article 5: to protect the individual against arbitrariness (…). This refers not only to the “right to liberty” but also to the “right to security of person”, as stated in the ECHR judgment in the case of Bozano v. France of December 18, 1986. https://hudoc.echr.coe.int/sites/eng/pages/search.aspx?i=001-57448

Thus, a State being a member of the Council of Europe must comply with the norms of the European Convention for the Protection of Human Rights and Fundamental Freedoms, by the means of investigation and court authorities, that once again violated the right to liberty in respect of the former political prisoner Mammad Ibrahim.