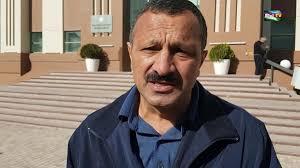 Analysis of violation of law during Tofiq Yaqublu’s judicial proceedings

The National Council of Democratic Forces (NCDC), the leading opposition organization in Azerbaijan, scheduled a rally in front of the “28 May” metro station on 19 October 2019. In the morning of 19 October, the police encircled the entire territory near the metro station. The meeting was planned to be held at 15:00. As early as 2 p.m., an hour in advance of the planned rally, the “28 May” metro station was closed, and the trains didn’t stop at the station. Mobile communications and the Internet were cut off in the entire adjacent area. Gathering around the “28 May” station people started shouting slogans -“Liberty”, “Resignation”, “We demand higher pensions”, “Return child allowances” and others. The police used excessive physical force to disperse the rally participants taking them to an unknown destination.
At 14:11, the Chairman of the Popular Front Party of Azerbaijan (PFPA) Ali Kerimli (the party is a member of the NSDS) wrote on his official Facebook page that his house had been surrounded by about 20 policemen. There were also journalists near his house, namely Tazakhan Miralamli, Fatima Movlamly, and some others. Ali Kerimli called up all the journalists to his house and announced that he would leave the house at 14: 40. At the scheduled time, Ali Kerimli gave a short interview to the media and moved towards the above mentioned metro station. Members of the PFPA, and also Tofiq Yaqublu, a former political prisoner who is presently a member of the NCDC, a member of the Musavat Party, one of the organizers of the action were beside Ali walking hand in hand with Kerimli. The police attacked the opposition in just a few minutes. Tofiq Yaqublu tried to protect Ali Kerimli from the police brutality. At 15:29, the administrator of Ali Kerimli’s Facebook page wrote about Ali Kerimli’s detention by the police. At the same time, Tofiq Yaqublu was detained by the police and taken to an unknown location.
In the evening of 19 October the journalists, civil society activists and the members of the opposition parties gathered in front of the Nasimi District Police Department in Baku, where the detainees were supposedly brought to. Ali Kerimli was released in a few hours after his arrest. The whereabouts of the other detainees were unknown. In the evening, Ali Kerimli appeared live on Youtube channel of Osmanqizi TV. He had the obvious physical injuries. He said that he had passed through inhuman and degrading treatment; as a result of the beatings he got a head trauma, six stitches had been inflicted on his wounds. The law enforcement officials had demanded him to give up his political struggle.
The following day, the news concerning Tofiq Yaqublu was revealed. On 19 October 2019, the Nasimi District Court of Baku city issued a sentence of conviction for administrative offences under the Articles 513.1 (violation of the rules concerning organization and conducting of assemblies) and 535.1 (malicious disobedience to the lawful demands of the police officer) of the Code of Administrative Offences of the Azerbaijan Republic and sentenced Tofiq Yaqublu to one month of administrative detention.
On 25 October 2019, Tofiq Yaqublu’s daughter, Nigar Hazi, informed the press that she had met her father in an administrative offence detention facility. She told that her father was behind a glass wall at the time of their meeting. She pointed out that her father’s face had been covered with visible signs of bruises, and been very swollen. Nigar Hazi also reported that, according to her father, his hands had been handcuffed and pulled up to the top at the moment when, after his detention, he was brought up to the Nasimi District Police Department in Baku. The policemen have beaten him with their legs and hands for an hour. While beating him, they forced him to confess that he had made a mistake and demanded to give up his participation in the opposition. When he refused to obey their demands, the police kept beating him up even more severely.

The court decision is illegal and unjustified. In has been determined as the court ruling states during the trial that the members of the NCDC had applied to the Baku City Executive Authorities and informed them of their intention to hold a rally on 19 October 2019.

There were offered several venues for the rally in an appeal to the Executive Authorities:

The Executive Authorities of the city of Baku prohibited to hold a rally in the territories specified by the organizers and offered another place instead: a training and sports base in Lokbatan settlement of Garadagh district, located about 22 km from the center of Baku.
Moreover, the Ministry of Internal Affairs of Azerbaijan and the Prosecutor General’s Office issued a joint statement, in which it was said that the organizers of rally would be fully responsible and a rally would be stopped in case of attempting to hold it any other place but the one the authorities have proposed. Tofiq Yaqublu, as a member of NCDC, was one of the rally organizers. The court ruling stated that the rally had been banned at the square near the metro station “28 May” but despite the ban, Tofiq Yaqublu participated in an unsanctioned action.
Tofiq Yaqublu was charged with two administrative offences: violation of the rules concerning an organization and conducting of assemblies and malicious disobedience to the lawful demands of the police officer.
Let’s consider the first offence.
According to the Article 49 of Constitution of Azerbaijan Republic,

I. A person or persons organizing any assembly enumerated in Article 2 of the present Law have to notify in advance the relevant body of executive power in written. A notification has to be submitted 5 days prior to the day of convening the intended assembly.
As stated at the legal norms, both in the Constitution and the Law “On Freedom of Assembly”, it is said about obligation to notify but not about the permission.  The court ruling also states that the organizers have applied in a written form to the Executive Authorities of Baku and, in accordance with the Constitution and the Law “On Freedom of Assembly”, notified them of the intention to hold a rally.
As can be seen on the video recordings, the rally participants held a peaceful protest action, they did not have any weapons in their hands that could injure or hurt anyone, their slogans did not have a provocative character, there were no calls for violence or war.
In the Law on Freedom of Assembly  also specifies grounds and order of restricting or banning a peaceful assembly. According to the Article 7 of Law on Freedom of Assembly  lawful a restriction of freedom of assembly is:

According to the Article 8 of Law on Freedom of Assembly  specify the grounds for prohibition or suspension of an assembly:

The second offence that has been alleged against Tofiq Yaqublu, concerned malicious disobedience to the legitimate demands of the police officer. The court ruling refers to the testimony of Emil Babayev, a member of the Baku Nasimi District Police Department, who showed that he had seen Tofiq Yaqublu agitating people to participate in an unsanctioned action and trying to organize mass riots. According to the policeman’s testimony, he approached Yaqublu, introduced himself and asked to follow him to the police department but Tofiq Yaqublu refused to…
In order to understand the absurdity and falsity of the police officer Emil Babayev’s testimony, it is enough to watch a videotape showing the policemen’s rudeness and  force at the moment of Tofiq Yagublu’s detention. Watch the video:
https://www.youtube.com/watch?v=5uWcUVgOWxY&feature=emb_title

The court did not conduct an investigation to find out what kind of demands T. Yaqublu had not obeyed and whether these demands had been legitimate. As mentioned above, the rally organizers conducted it in accordance with the law, which means that the police demands to stop it were illegal.
Tofiq Yaqublu (and earlier his daughter Nigar Hazi) stated that he had been subjected to terrible torture, severe beatings and inhuman treatment while being in the police custody. Tofiq Yaqublu was subjected not only to physical but also psychological torture: the police threatened him with the death of his son, Rahim Yaqublu, who is also a member of the Musavat Party.
According to the Article 3 of the Convention for the Protection of Human Rights and Fundamental Freedoms,  no one shall be subjected to torture or to inhuman or degrading treatment or punishment. This norm does not contain any exceptions, and it is valid even at the period of fights against terrorism, mafia or during hostilities.

With regard to Tofiq Yaqublu, the norms of the Constitution of Azerbaijan, the Law of the Azerbaijan Republic “On Freedom of Assembly”, the Articles 3 and 11 of the European Convention for the Protection of Human Rights and Fundamental Freedoms, as well as the norms of procedural law were grossly violated