TOFIQ YAQUBLU, THE OPPOSITION LEADER, HAS BEEN ACCUSED OF COMMITTING AN ACT OF HOOLIGANISM 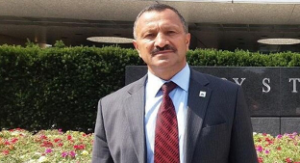 Analysis of violation of law during Tofiq Yaqublu’s judicial proceedings

Tofiq Yaqublu, a member of the opposition party Musavat, also a member of the Coordination Center of the National Council of Democratic Forces, an ex-political prisoner, was arrested on the charge of committing a crime under the Article 221.3 (The hooliganism committed with application of a weapon or subjects, used as the weapon) of the Criminal Code of the Azerbaijan Republic (CC AR).

Parviz Ibayev, the prosecutor of the Nizami District of Baku city, and a senior advisor of justice, have applied to the court with a request to impose a measure of detention in the form of imprisonment against Tofiq Yaqublu. The prosecutor’s statement and the investigator’s request were justified by the fact that on 22 March 2020, at about 3 p.m., Tofiq Yaqublu had disrupted public order and committed an act of hooliganism using an object reminding some weapon. The violation took place on Nakhchivanski Street in the Nizami District of Baku city. Thus, according to the investigation, while driving his Toyota Corolla towards Qarayev Avenue, Tofiq Yaqublu ran into the car, a VAZ-21074, which was moved in the same direction, the driver of the VAZ happened to be Elkhan Jabrayilov. After the collision, Tofiq Yaqublu attacked Elkhan Dzhabrayilov, creating traffic obstacles for other vehicles, cursing, punching with his fist on Jabrayilov’s head and right shoulder, then striking with a screwdriver in his right shoulder. The wife of Jabrayilov, Javakhir Jabrayilova, tried to interfere, but T. Yaqublu began to scold  and pushed her away by hitting her right arm with his fist. Thus, according to the investigation, Tofiq Yaqublu committed an act of hooliganism using a screwdriver.

On 22 March 2020, Tofiq Yaqublu wrote on his Facebook  that he had been provoked. He stated that while driving with his wife to the market, he stopped when some car hit him from behind. Then the driver of the other car got out of his vehicle and wanted to attack T. Yaqublu, at which point Tofiq Yaqublu blocked the car windows and doors. The assailant started hitting the car windows, insulting T. Yaqublu. Tofiq Yaqublu’s wife witnessed what had happened and, later repeatedly spoke about that provocation and attack in the media. While in the car, Tofiq Yaqublu called the police and reported the incident.

On 23 March, the Press Service Chief of the Azerbaijani Ministry of Internal Affairs, Ehsan Zahidov, in response to the request of the information website www.report.az, replied that on 22 March 2020, at about 15.00, Tofiq Yaqublu violated the traffic rules, unreasonably attacked Elkhan and Javakhir Jabrayilovs, inflicting them bodily injuries, therefore, a criminal case was initiated against T. Yaqublu.

Tofiq Yaqublu denies the accusation and associates it with his intense political activities. T.Yaqublu’s daughter, a former political prisoner, Nigar Hazi, informed the press that her father’s persecution had been specifically related to harsh criticism of the President of Azerbaijan last speech on the eve of Novruz holiday on 19 March 2020, in which T. Yaqublu also talked about coronavirus and danger of the “5th column”, the internal enemies that Ilham Aliyev called the opposition. – https://www.youtube.com/watch?v=Va3h73mMl_8

One of the objectives of criminal proceedings is to protect individuals, society and the State from criminal attacks. The Criminal Law prescribes courts and participants of criminal proceedings to strictly observe the Constitution, the Laws of the Azerbaijan Republic, and also the International Agreements, the participant of which is the Azerbaijan Republic.

The right to freedom is one of the fundamental human rights. According to the Article 5 (1) of the European Convention for the Protection of Human Rights and Fundamental Freedoms,

According to the Article 9 of the Universal Declaration of Human Rights, no one shall be subjected to arbitrary arrest, detention or exile.

The European Court of Human Rights (ECHR), whose resolutions are to be of recommendatory nature, dictates the Council of Europe member states to rigorously observe the right to freedom. The right to freedom protects an individual’s physical freedom. The European Court of Human Rights ruling in the case of Smirnov v. Russia of 24 July 2003 (para. 58) states that a person charged with an offence ought always to be released prior to the trial, unless the state can provide “appropriate and sufficient” reasons to justify the extended detention. – http://echr.ru/documents/doc/new/004.htm

In the Tofiq Yaqublu’s case, there have been violations of the procedural rights. According to the Article 154.2 of the Criminal Procedure Code of the Azerbaijan Republic  (CPC AR), restrictive measures may be the following:

The Court’s ruling does not contain the justification for choosing the most severe constraint measure against T. Yaqublu, i.e. arrest. According to the Article 155.1 of the CPC AR, restrictive measures may be applied by the relevant preliminary investigator, investigator, prosecutor in charge of the procedural aspects of the investigation or court when the material in the prosecution file gives sufficient grounds to suppose that the suspect or accused has:

155.1.1. Hidden from the prosecuting authority;

155.1.2. Obstructed the normal course of the investigation or court proceedings by

illegally influencing parties to the criminal proceedings, hiding material significant to the prosecution or engaging in falsification;

155.1.3. Committed a further act provided for in criminal law or created a public threat;

155.1.4. Failed to comply with a summons from the prosecuting authority, without good reason, or otherwise evaded criminal responsibility or punishment;

In accordance with the Article 155.2 of the CPC AR, in determining whether it is necessary to choose a preventive measure and which of them should be applied to a specific suspect or accused person, a person conducting an initial inquiry, an investigator, a procurator managing the preliminary investigation, or a court should take into account the following:

155.2.2 The severity, nature and conditions under which the act is committed by the alleged suspect or accused;

155.2.4. The availability or lack of reconciliation between the suspected or accused person and the victim or his or her legal successor who is a close relative, it should be ensured that the damage caused as a result of the crime is compensated, and other essential circumstances.

In this case, the court did not take into account the defendant’s identity, his political credibility, the presence of several diseases, age and other relevant factors. The ruling specifies the grounds for arrest as a preventive measure:

The court is to consider each of the grounds separately and provide the concrete evidence and facts in order to justify the choice of a strict constraint measure.

As to the danger of absconding and severity of the sentence, the European Court of Human Rights (ECHR) regards these points: “60.  The danger of absconding cannot be gauged solely on the basis of the severity of the possible sentence; it must be assessed with reference to a number of other relevant factors which may either confirm the existence of a danger of absconding or make it appear so slight that it cannot justify pre-trial detention. In this context regard must be had in particular to the character of the person involved, his morals, his assets, his links with the State in which he is being prosecuted and his international contacts (Case of Smirnova v. Russia from 24 July 2003).” –  http://sutyajnik.ru/rus/echr/judgments/smirnova_eng.htm

As it is known, in order to leave the country a citizen of Azerbaijan must possess a general civil passport. The investigating body could have confiscated T. Yaqublu’s passport in order to limit his mobility. This measure would have been enough. Therefore, even this argument could not be substantiated by the investigative bodies and was limited only to repeating automatically the norms of the criminal procedure legislation.

The issue of whether a period of detention is reasonable cannot be assessed in abstract. Whether it is reasonable for an accused to remain in detention must be assessed in each case according to its special features. (Para. 61 of the Case of Smirnova v. Russia from 24 July 2003).” –  http://sutyajnik.ru/rus/echr/judgments/smirnova_eng.htm

“The Court emphasizes that it is fundamental in a democratic society to guarantee the rights of a person against unlawful arrest or detention by the authorities, as contained in the Article 5. Therefore, the Court has repeatedly pointed out in its judgments that any deprivation of freedom must not only be in accordance with the fundamental procedural rules of the national law, but should also comply with the purposes of the Article 5, i.e. to protect the individual from arbitrary arrest or detention by the authorities (see, inter alia, Chakhal v. the United Kingdom, Judgment of November 15, 1996-IV, cf. 1864, p. 118).

This urgent requirement to protect the individual against any kind of abuse by the authorities is supported by the fact that the Article 5, paragraph 1, limits the circumstances under which the individual may be lawfully deprived of his freedom, although these grounds cannot be interpreted in a broad manner, since they constitute exceptions from the fundamental guaranteeing of a person’s freedom” (paragraph 122 of the Regulation in the Case Kurt v. Turkey from 25 May 1998). – http://www.echr.ru/documents/doc/2461485/2461485.htm

It is also stated in the ECHR resolutions that the preventive measure chosen before the trial should not be justified by the fact that the incriminated article is punishable by more than 2 years’ imprisonment, as it violates the presumption of individual’s innocence.

In addition, the Decision of the Plenum of the Supreme Court of the AR “On the practice of implementation of the legislation by the courts while considering the submissions concerning the determination of the preventive measure in the form of the arrest in respect of the accused persons” dated November 3, 2009, it is recommended to the courts to check the validity and legality of the preventive measure in the form of arrest. In this regard, the ECHR rulings also state that the courts should endeavor to leave the accused free until the beginning of trial, and the court orders should indicate the grounds for impossibility of choosing a non-restrain measure. In a specific ruling, there is not a single clear evidence and argument, according to which Tofiq Yaqublu had been sentenced to 3-month-imprisonment.