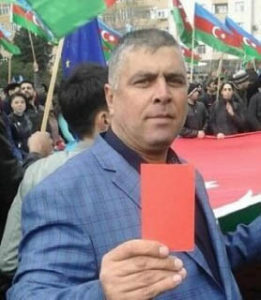 Analysis of violation of law during Zamin Salayev’s judicial proceedings

The person with respect to whom this Administrative Protocol has been drawn up: Zamin Salayev

Zamin Salayev, an activist of the Salyan branch of the opposition People’s Front Party of Azerbaijan (PFPA), has been known for his strong criticism of the incumbent president and active opposition activities. He has been repeatedly prosecuted by the authorities for his work on social networks. On 7 October 2019, Z. Salayev was detained by the police while traveling in a taxi. It happened the day before the picket took place. It was organized by the National Council of Democratic Forces near the Executive Power of Baku city. On 8 October, about 30 PFPA members were detained during the rally. Being held for two days at the Police station, Z. Salayev was brought to the Baku Narimanov District Court on 9 October 2019. The court found Zamin Salayev guilty of administrative misconduct under the Article 535.1 (disobedience to the police officer’s legal request) of the Code of Administrative Offences of the Azerbaijan Republic.

In September 2019, there was an information in the press stating that in Salyan city, a 21-year-old girl had stabbed in the back the head of the police investigation department with a pair of scissors. The media reported that the 21-year-old girl, Aytakin Abiyeva, who lives in Salyan, and the Police Captain Hamza Azizov, the head of the Salyan District Police Investigation Department, had a secret liaison. However, they had not been officially married. Her parents arranged the girl’s marriage to a relative, but the couple soon got divorced. The girl called Kh.Azizov and asked him to resume the relationship but he refused to do so. In a burst of anger, the girl stabbed the police captain in his back. The case was heard by the Lankaran Court of Serious Crimes. According to the verdict Aytakin Abiyeva was found guilty and sentenced to 7 years of imprisonment.

Zamin Salayev has taken up a private investigation of this case.  Base on the amount of collected by him information, he came to the conclusion that the policeman had tried to rape the girl. And Aytakin Abiyeva, defending herself, stabbed the police captain with a pair of scissors.

Then, Zamin Salayev came to Salyan and, approaching H. Azizov, told him in his face what crime the policeman had committed, and he should be punished.  Zamin Salayev filmed that conversation on video and distributed it on some social networks.

The police started to put pressure on Z. Salayev following  the distributed to the public information about  the Captain Hamza Azizov’s crime; the crime, which was committed by the Head of the Salyan police investigation department.  The Captain Hamza Azizov introduced himself as a relative of the Interior Affaires Minister, Vilayat Eyvazov, and threatened Z. Salayev with punishment referring to the Minister, in case if Zamin wouldn’t stop his activities.

On 13 January 2020, Z. Salayev arrived to Baku in order to inform the Ministry of Interior Affaires about the illegal actions and threats carried out by the Captain H. Azizov.

On 13 January, in the evening, Z. Salayev along with two other PFPA members went for dinner to one of the cafes situated in the Baku Sabayil district. Right at that moment they were approached and detained by the officers of the Baku City Police Headquarters. All three were subjected to a breathalyzer test. A small amount of alcohol was found in Z. Salayev’s blood. After that, the police officers drew up the administrative reports stating that all three of them allegedly had loudly quarreled outside a cafe. Two members of the PFPA were fined for 50 manats each, and Zamin Salayev was brought to the court.

On 13 January 2020, the Sabayil District Court of Baku City found Zamin Salayev guilty of committing an administrative offence under the Article 535.1 (disobedience to the policeman’s legal request) of the Code of Administrative Offences of the Azerbaijan Republic, and sentenced him to 1 month of administrative arrest.

On January 24, 2020, Zamin’s son Oqtay Salayev met with him. After the meeting with his father, Oqtay Salayev told the media that his father had been subjected to cruel tortures and humiliation while being kept at the 8th police station. Z. Salayev had also written about the torture in his letter.

In his letter, Zamin Salayev wrote that he was severely beaten by 10-15 policemen at the 8th Police station. As a result of the beating, he suffered a burst hernia on his abdomen. And the policemen had to call for doctors from the Ministry of Interior Hospital, who stated the necessity of the operation, but the policemen did not authorize them to do it.

On 24 January 2020, the staff of the Ombudsman’s Office visited Z. Salayev. However, they declared that there were no signs of torture on Zamin Salayev’s body.

The National Council of Democratic Forces issued a statement condemning the use of torture by the police against Zamin Salayev. The National Council reiterates that the violation of law by the officials in the country, the transformation of law enforcement agencies into the tools of repression and punishment, is directly attributed to President Ilham Aliyev himself. The police and other government agencies by relying on the principles of Ilham Aliyev’s rule, and in some cases, on the basis of his order, commit crimes and other anti-human acts. The National Council notes that what happened to Zamin Salayev is another example of terrorism against the citizen, the next state crime. –http://www.contact.az/ext/news/2020/1/free/Social/en/86733.htm

On 25 January 2020, Ehsan Zahidov, the Chief of the Press Service of the Ministry of Interior, was interviewed saying that all Zamin Salayev’s accusations against the police captain Hamza Azizov “have no legal grounds” and “Z. Salayev’s statements about torture are fictitious as well”.

The Sabayil District Court verdict of 13 January 2020 is unlawful and groundless. The Article 5.1 of the Code On administrative violations of the Azerbaijan Republic states: “The rights and freedom of human and citizens are of great value. All the state authorities (officials) having committed violation of these rights and freedom shall be responsible in the order provided by legislation of the Azerbaijan Republic”.

The right to freedom guaranteed by the Article 28 of the Azerbaijani Constitution has been violated with regard to Zamin Salayev. According to this article:

According to the Article 5(1) of the European Convention for the Protection of Human Rights and Fundamental Freedoms, everyone has the right to liberty and security of person.

The list of restrictions set forth in this article is quite clear and cannot be widely interpreted. According to this article: No one shall be deprived of his liberty save in the following cases and in accordance with a procedure prescribed by law:

(b) the lawful arrest or detention of a person for non-compliance with the lawful order of a court or in order to secure the fulfillment of any obligation prescribed by law;

As can be seen from the list of restrictions, none of them took place in the case of Zamin Salayev. This means that the arrest of the opposition functionary had no legally binding purpose, and therefore was not legitimate.

The International Covenant on Civil and Political Rights also protects and preserves a fundamental right enshrined in the treaty. According to the Article 9 Paragraph 1, everyone has the right to liberty and security of person. No one shall be subjected to arbitrary arrest or detention. No one shall be deprived of his liberty except on such grounds and in accordance with such procedure as are established by law.

The Article 71 of Constitution of Azerbaijan Republic states:

The Article 3 of the European Convention for the Protection of Human Rights and Fundamental Freedoms prohibits the use of torture as well as inhuman or degrading treatment and/or punishment. This article has no restrictions, which means that the use of torture is absolutely prohibited in all circumstances, from the fight against mafia, organized crime, military conflicts to the fight against terrorism.

In the case of “Soering v. The United Kingdom”, the ECHR judgment issued on 7 July 1989 said, that ill-treatment, including punishment, must attain a minimum level of severity if it is to fall within the scope of Article 3 (art. 3). The assessment of this minimum is, in the nature of things, relative; it depends on all the circumstances of the case, such as the nature and context of the treatment or punishment, the manner and method of its execution, its duration, its physical or mental effects and, in some instances, the sex, age and state of health of the victim. –

In the case of “Cruz Varas and others v. Sweden”, the ECHR judgment issued on 20 March 1991 said, that in determining whether substantial grounds have been shown for believing in the existence of a real risk of treatment contrary to Article 3 (art. 3) the Court will assess the issue in the light of all the material placed before it or, if necessary, material obtained proprio motu. – http://echr.ketse.com/doc/15576.89-en-19910320/view/

In the case of “Dikme v. Turkey”, the ECHR judgment issued on 11 July 2000  said, that the Court reiterates that where an individual is taken into police custody in good health but is found to be injured at the time of release, it is incumbent on the State to provide a plausible explanation of how those injuries were caused, failing which a clear issue arises under Article 3 of the Convention. – https://hudoc.echr.coe.int/eng#{“itemid”:[“001-58751”]}

Apart from the norms of the substantive law under both national and international law, the norms of the procedural law were seriously violated. Pursuant to the Article 91 of the Code on Administrative Offences of the Azerbaijan Republic, the authorized body ( an official) shall take the following measures to ensure a detainee’s rights established by this Code (the Article 91.0 of the Code):

91.0.1. Immediately inform a detainee of the grounds for his/her detention and explain his/her rights;

91.0.2. Familiarizing a detainee with the protocol on administrative misconduct;

91.0.3. At the detainee’s request, informs his/her close relatives, the administration of the place where he/she works or studies, or his/her lawyer about the detention;

91.0.4. Immediately inform the minor detainee’s parents or other legal guardians about his/her detention;

91.0.5. The treatment of the detainee shall be respectful towards his or her personality and dignity;

91.0.6. Enables a detainee to communicate with his/he lawyer including the possibility to meet with the detainee’s lawyer;

91.0.7. If a detainee does not have his/her own lawyer, the list of lawyers operating in the legal structures at the place of temporary detention shall be made available to the detainee, who shall be able to communicate with the lawyer of his/her choice and to hold meetings with that lawyer.

None of these rights have been respected in the case of Zamin Salayev during his detention.

In view of the above, we conclude that the police officers violated the norms of national and international laws, two fundamental rights: the right to freedom and the right not to be subjected to torture and humiliating.