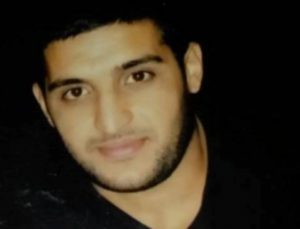 Shabnam Nazarova, a wife of Elvin Nazarov, told to a correspondent of the agency Veten ugrunda that her husband had had serious problems behind the bars. She visited him in the colony number 2. “He vomits every day, he has very severe headaches, however, he is only given painkillers in the prison, instead to send him for a medical examination,” she said. Sh. Nazarova went on by saying that her husband also had serious problems with his eyesight, he was practically blind.

“All these problems have occurred following the terrible torture he had been subjected to during the investigation. He keeps telling me about it,” Nazarova added. In his letter that was handed over to the agency Veten ugrunda, Elvin Nazarov described in detail the torture he had been subjected to in the Nizami and Kyapaz Police Departments in Ganja; the tortures he had suffered after being arrested on 11 July 2018, “I was beaten as soon as they brought me to the police station. My hands were first handcuffed and my eyes were covered with a black bandage so that I could not see the torturers’ faces. When they tried to cover my mouth with a piece of scotch tape, I told them that I couldn’t breathe through my nose, only through my mouth, otherwise I would choke. I promised them to be silent, I’ll stand for it as long as they don’t cover my mouth.”

After that, he was brutally beaten with truncheons on his legs and also all over his body, mostly on his kidneys. “I was beaten so hard that I fainted. During the following days, I had been beaten from early mornings up to late nights. When I fainted, they poured water on me, I came to my senses and they beat me up again,” wrote Elvin Nazarov in his letter.

As a result of these physical violence, Nazarov’s body was covered in blood and bruises. “One day, two men with strong fists started beating hard on my ears and head. My mouth, nose and ears were bleeding. When they saw that my eardrums hadn’t burst, they took thick books and used them to slap my ears and head. I lost consciousness, they poured water on me and kept beating me again,” Nazarov recalled in his letter.

At some point, one of his torturers said that he knew the best way to beat him up without getting tired, “Shackling my hands from behind, one of them sat down on my laps and began beating me up as hard as he could. The other slid a lighter through my body. The pain was infernal”, he continued his recollections of the endured tortures.

Because of all that, E. Nazarov could not walk on his own, he was not allowed to sit during the interrogations. When once he was allowed to sit down, he was unable to take a seat on his own because of his wounds. He was beaten on his heels for so long, that the poor man could not walk anymore since he suffered from the agonizing pain. “Seven months have passed since those tortures, but I still remember them, because the traces of tortures are still on my body,” Nazarov concluded his recollection in the letter.

It should be noted that Elvin Nazarov was arrested on 11 July 2018, and for the first 9 days he was subjected to brutal torture at the police station, where his lawyer or any of his relatives did not have an access, and moreover, the court decision was not issued. On March 1, 2019, he was sentenced to 7 years imprisonment. On 29 August 2019, the Baku Court of Appeal reduced the sentence to 2,5 years. 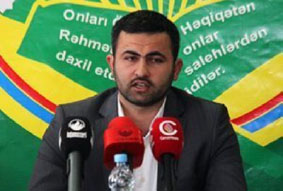 Deputy Chairman of the Muslim Unity Movement (MUM) Elchin Gasymov was summoned to the Main Directorate for Combating Organized Crime (MDCOC) of the Ministry of Internal Affairs on 19 November.

The reason for Gasymov’s call to the MDCOC was the event planned by the MUM on 26 November, dedicated to the next anniversary of the Nardaran events. He informed Turan agency about it.

“I got a warning. I was told that if the event takes place, the police will intervene,” Gasymov said. 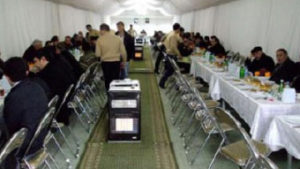 On 26 November, the police broke a memorial event in one of the private houses in the Mashtaga settlement for members of the MUM who were killed during a special operation in Nardaran on 26 November 2019.

After reading the Koran, when food was being served on the table, police officers came into the house and demanded that the event be stopped.

In order to avoid confrontation, members of Muslim Unity left the premises, the MUM press service said in a statement.

The deputy chairman of the MUM Elchin Gasymov and the house owner were summoned to the Sabunchi District Police Department today at 10.00.

By 11.30, both were released, after taking explanatory notes from them.

According to Gasymov, they were told that the holding of such events is “not allowed”.

And the house owner was warned that if this happens again, a criminal case will be launched against him, Gasymov said.