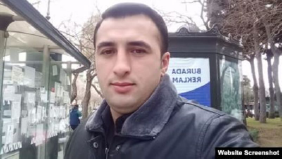 Analysis of violation of law during Niyamaddin Ahmadov’s judicial proceedings

The State Prosecutor: Elchin Ibrahimov, the Senior Prosecutor of the Forensics Department at the Investigation Division on Grave Crimes of the AR General Prosecutor’s Office

With the participation of the prosecutor, Ramig Babayev, the head of the investigation group of the Investigative Division on Grave Crimes of the Azerbaijan Republic General Prosecutor’s Office

A member of the Azerbaijani Popular Front Party (APFP) Niyamaddin Ahmadov took an active part in a protest action in Baku city center on 19 October 2019. He was also a volunteer bodyguard of APFP leader, Ali Karimli. A dozen protesters were arrested on October 19, 2020. During his detention, Ali Karimli was brutally treated and suffered a head injury. A member of the Musavat Party, Tofiq Yaqublu, and Niyamaddin Ahmadov, a member of the National Council of the Democratic Forces, were beside him and were trying to protect him while the police officers, as well as individuals in civilian clothes, were physically assaulting Ahmadov. See: https://www.youtube.com/watch?v=5uWcUVgOWxY

Following the action, Tofiq Yaqublu was arrested under administrative detention for 30 days.  And on 23 March 2020, the criminal case against T. Yaqublu was instituted on charges of hooliganism. The Nizami District Court of Baku City has ordered to impose a 3-month preventive punishment in the form of imprisonment against Tofiq Yaqublu. See: https://www.ipd-az.org/opposition-leader-tofig-yagublu-accused-of-hooliganism/

On 16 April 2020, Niyamaddin Ahmadov was placed in custody for 30 days under administrative detention “for violating quarantine measures and disobeying the lawful demands of a police officer”. The Azerbaijani Popular Front Party made a special statement stating that during the administrative arrest N. Ahmadov had been taken out of the Binagadi Temporary Detention Facility and placed in the Pre-trial Detention Center of the State Security Service (SSS), where he had been subjected to torture in the form of inflicting physical injuries by means of beating and with the use of a taser.

On 16 May 2020, Niyamaddin Ahmadov’s 30-day administrative arrest was due to expire. His family, relatives, friends and the journalists were waiting for Niyamaddin Ahmadov at the exit of the Binagadi Temporary Detention Facility, where he had to be kept, but they were unable to meet him. The media wrote about his disappearance. There was no news about Niyamaddin Ahmadov for three days.

Only on 19 May 2020, the Azerbaijan Republic General Prosecutor’s Office released the information about the initiation of criminal case against Niyamaddin Ahmadov confirming his detention in the Pre-trial Detention Center of the SSS. In the statement of the General Prosecutor’s Office it was indicated that Ahmadov had received money from his fellow villager Qabil Mamedov residing in Germany in order to finance some terrorist organizations.

There was initiated a criminal case against Niyamaddin Ahmadov under the Article 214-1 (Terrorism Financing) of the Criminal Code of the Azerbaijan Republic, and as about Qabil Mammadov, he was put on International Wanted list. See: https://novator.az/2020/05/20/niyam-ddin-hm-dovun-h-bsi-il-bagli-r-smi-m-lumat/

On 16 May 2020, the Baku Nasimi District Court sentenced Niyamaddin Ahmadov to 4 months’ imprisonment.

The court verdict is unlawful and unjustified. According to the Article 153.2 of the Code of Criminal Procedure of the Azerbaijan Republic, to secure the rights of the detainee, the officials of the prosecuting authority and those in charge of the temporary detention facility shall:

153.2.1. inform the detainee immediately after detaining him of the grounds for detention, and explain to him his right not to testify against himself and his close relatives as well as his right to the assistance of defence counsel;

153.2.4. secure the right of the person to inform others of his detention immediately after detention (the authority in charge of the temporary detention facility, on his own initiative, shall inform the family members of any detainees who are elderly, under age or unable to do so themselves because of their mental state);

153.2.5. provide opportunities for the person, from the moment of detention, to meet in private and in confidence with his lawyer and legal representative under decent conditions and under supervision;

153.2.6. if the detainee does not have a lawyer of his own, present him with a list of lawyers from the bar association offices in the vicinity of the temporary detention facility, contact the chosen lawyer and create an opportunity for the detainee to meet him;

153.2.7. if the financial position of the detainee does not enable him to retain a lawyer at his own expense, create an opportunity for him to meet the duty lawyer from one of the bar association offices in the vicinity of the temporary detention facility, at the state’s expense;

153.2.8. if the detainee refuses the services of a lawyer, receive his written request to that effect (if he evades writing the request, a record to that effect shall be drawn up between the lawyer and the representative of the temporary detention facility).

The provisions of the Article 153.2 of the Code of Criminal Procedure of the Azerbaijan Republic were not observed in respect of Niyamaddin Ahmadov’s case.

According to the Article 155.1 of the Code of Criminal Procedure of the Azerbaijan Republic, restrictive measures may be applied by the relevant preliminary investigator, investigator, prosecutor in charge of the procedural aspects of the investigation or court when the material in the prosecution file gives sufficient grounds to suppose that the suspect or accused has:

155.1. Restrictive measures may be applied by the relevant preliminary investigator, investigator, prosecutor in charge of the procedural aspects of the investigation or court when the material in the prosecution file gives sufficient grounds to suppose that the suspect or accused has:

155.1.1. hidden from the prosecuting authority;

155.1.2. obstructed the normal course of the investigation or court proceedings by illegally influencing parties to the criminal proceedings, hiding material significant to the prosecution or engaging in falsification;

155.1.3. committed a further act provided for in criminal law or created a public threat;

155.1.4. failed to comply with a summons from the prosecuting authority, without good reason, or otherwise evaded criminal responsibility or punishment;

The Baku Nasimi District Court has indicated the following grounds issued on 16 May 2020:

It should be noted that the court did not provide any evidence or fact that justified the grounds listed in that ruling.  It simply automatically re-written the grounds from the corresponding article of the Code of Criminal Procedure of the Azerbaijan Republic, and omitted any facts that may justify the application of the most severe preventive measure.

Article 157.1 of the Code of Criminal Procedure of the Azerbaijan Republic state: “In accordance with the principle of the presumption of innocence, if the connection of the person to the offence committed is not proven, he may not be arrested or unnecessarily detained on remand”.

The right to freedom guaranteed by the Constitution of the Azerbaijan Republic was violated with regard to N. Ahmadov. According to the Article 28 (I) of the Constitution of the Azerbaijan Republic, everyone has the right for freedom. Accordance the Article 28 (II), right for freedom might be restricted only as specified by law, by way of detention, arrest or imprisonment.

This right is also enshrined in the European Convention for the Protection of Human Rights and Fundamental Freedoms, the Article 5 (1), subparagraph (c):

The right to liberty is also enshrined in the Article 3 of the Universal Declaration of Human Rights. It states “Everyone has the right to life, liberty and security of person”.

The Judgment of the European Court of Human Rights (ECHR) in the case of Wemhoff v. Germany of the 27 of June 1968 states “If the detention is prolonged solely for fear that the accused will escape justice, he should, however, be released from custody if he provides the relevant guarantees”. See: https://hudoc.echr.coe.int/tur?i=001-57595.

The judgment of the European Court of Human Rights in the case of Le Létellier v. France of the 26 of June 1991 states “The Court recognizes that the particular gravity of certain crimes may trigger a public reaction and social consequences that make pretrial detention justified, at least for a certain period of time. In exceptional circumstances, this point may be taken into account in the light of the Convention, at least to the extent that domestic law (…) recognizes the notion of a breach of public order as a consequence of an offence. However, this element may be considered justifiable and necessary only if there is reason to believe that the release of the detainee will indeed disrupt public order or if the public order is indeed at risk. Pre-trial detention should not prejudge the deprivation of liberty sentence” https://hudoc.echr.coe.int/tur?i=001-57678.

In the matter examined, Niyamaddin Ahmadov’s release under a non-arrest constraint measure (bail, travel ban subscription, etc.) would not disrupt the public order and would not cause indignation and fear in the society. The application of the arrest had no legitimate objective as it did not comply with the provisions of the criminal procedure law and had no definite primary evidence to prove the involvement of Ahmadov in any crime.

According to the European Convention for the Protection of Human Rights and Fundamental Freedoms, Article 1, The High Contracting Parties shall secure to everyone within their jurisdiction the rights and freedoms defined in Section I of this Convention.

“In accordance with the general principles of international law, supported by the Spirit of the Convention, as well as the preparatory works carried out, the High Contracting Parties are obliged to ensure that their domestic legislation complies with the Convention and, where necessary, to take such adaptation measures as may be appropriate for this purpose, whereby the Convention binds all authorities of these Parties, including the legislative power” (“Cases of the European Court of Human Rights”, Michele de Salvia, St. Petersburg, 2004).

Azerbaijan’s domestic criminal procedure legislation on the application of preventive measures fails to comply with the European Convention for the Protection of Human Rights and Fundamental Freedoms.

In particular, Article 155.3.1 of the Code of Criminal Procedure of the Azerbaijan Republic state that a person charged with an offence punishable by deprivation of liberty for a period of more than two years.

The precedents of the ECHR point to the fact that the seriousness of the crime and its further punishment cannot justify the choice of preventive measure in the form of pre-trial detention. Thus, in Paragraph the 14 of the judgment of the ECHR in the case of Wemhoff v. Germany of 27 June 1968, it was stated that “As to the danger of flight, the Court is of opinion that, while the severity of the sentence which the accused may expect in the event of conviction may legitimately be regarded as a factor encouraging him to abscond – though the effect of such fear diminishes as detention continues and, consequently, the balance of the sentence which the accused may expect to have to serve is reduced, nevertheless the possibility of a severe sentence is not sufficient in this respect. ”

Thus, the application of the preventive measure in the form of detention, its unjustified and unfounded term of 4 months, the severity of the alleged crime and its sanction violated the right of N. Ahmadov to freedom guaranteed by the Constitutional Norm, by the corresponding articles of the Criminal Procedure Law, by the European Convention for the Protection of Human Rights and Fundamental Freedoms, by the Universal Declaration of Human Rights, as well as by numerous precedents of the European Court of Human Rights, which have recommended to the member states.