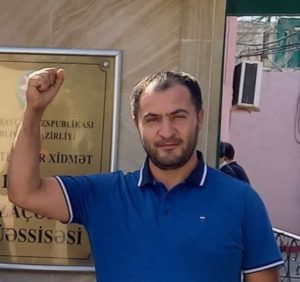 Analysis of violation of law during Elkhan Aliyev’s judicial proceedings

The person against whom an administrative record was issued: Elkhan Aliyev

The person who drew up the administrative report: Sanil Abdullayev, the Police Chief of the 20th Station in Nasimi District Police Department

Elkhan Aliyev is a member of the Popular Front Party of Azerbaijan (PFPA) and is known for his active political activities, participation in rallies and sharp criticism of the country’s leadership on social networks. Elkhan Aliyev has been previously arrested and subjected to administrative charges on several occasions.

However, regardless of his obedience to the police, an administrative report was made against E.Aliyev for allegedly violating the Articles 510 (Failure to obey the legitimate demands of a policeman) and 535.1 (Disorderly Conduct) of Azerbaijan’s Code of Administrative Offences.

In the course of the trial, Elkhan Aliyev testified that he had not committed any administrative offence, his arrest, as well as the previous ones, had been based on his political activities and there had been no evidence of his guilt; the video from the surveillance cameras’ as well as witnesses could prove  his innocence.  Also, he indicated that he had not been given the opportunity to inform his family about his arrest and whereabouts.

During the trial, Sanil Abdullayev, the Chief of the 20th Station of the Baku Nasimi District Police Department, stated that he had approached E.Aliyev and urged him not to commit administrative violations. However, E.Aliyev did not comply with the police officer’s legitimate demand and continued his illegal actions.

There were documents enclosed to the administrative case file indicating that Elkhan Aliyev had also committed an administrative offence under the Article 535.1 of the Administrative Offences Code on October 8, 2019, May 9, 2020, and October 16, 2021.

In accordance with the Code of Administrative Offences, Article 32, the Court found that E.Aliyev’s family was a mitigating circumstance. However, the Court determined that under the Article 33 of the Code of Administrative Offences, the repeated commission of offences within one year was an aggravating factor. On March 19, 2022, Elkhan Aliyev was found guilty of committing offences under the above Articles and sentenced to 30 days of the administrative detention.

The PFPA members and Chairman, Ali Kerimli, believe Elkhan Aliyev’s arrest to be politically motivated, pointing out that “in the recent past E.Aliyev has been arrested on three occasions and sentenced to 30 days in detention”.

One of the fundamental principles in administrative proceedings is the presumption of innocence. This principle is most important in “sensitive cases”. According to the Article 8 of the Code On administrative violations of the Azerbaijan Republic,

According to the para 2 of the Article 6 of European Convention on Human Rights, everyone charged with a criminal offence shall be presumed innocent until proved guilty according to law.

In the course of the trial, the testimonies, similar to the contents of the report were given solely by the Chief of the 20th Station 20 of the Baku Nasimi District Police Department, who had written that report, and by E.Aliyev himself.  No other evidence was attached to the administrative case. In fact, the Court accepted the police officer’s testimony as irrefutable and reliable, whereas Elkhan Aliyev’s testimony was not taken into account and was not given a legal assessment.

The Court has not determined:

The following are evidence in administrative cases:

Elkhan Aliyev testified at the trial that he had not been given the opportunity to inform his family about his detention and location.  This right had to be granted to the detainee by the authority responsible for his detention.

Procedural violations also concerned Article 91 of the Code of Administrative Offences of the Azerbaijan Republic. In accordance with this article, the authorized body (official) takes the following measures to ensure the rights of the detainee established by this Code. The Article 91.0 of the Code:

Violation of the substantive and procedural rules of law in relation to E.Aliyev has led to a gross violation of his right to freedom, which is protected by the national and international law. Thus, the European Convention for the Protection of Human Rights and Fundamental Freedoms, Article 5, states, “Everyone has the right to freedom and personal security. No one shall be deprived of his liberty except as provided for by the law in the following cases and in the manner prescribed by the law.” The list of cases is very precise and should not be interpreted in any other way. This regulation protects individuals from arbitrary arrest. It stipulates the individual’s physical freedom.

According to the judgment of the European Court of Human Rights in the case of Aksoy v. Turkey from the 18th of December 1996, “The Court enshrines a fundamental human right, namely the protection of the individual against arbitrary interference by the State with his or her right to liberty. Judicial control of interferences by the executive with the individual’s right to liberty is an essential feature of the guarantee embodied in Article 5§3, which is intended to minimise the risk of arbitrariness and to ensure the rule of law (see the above-mentioned Brogan and Others judgment, p. 32, 58). Furthermore, prompt judicial intervention may lead to the detection and prevention of serious ill-treatment, which, as stated above (paragraph62), is prohibited by the Convention in absolute and non-derogable terms”.  https://hudoc.echr.coe.int/fre#{“itemid”:[“001-58003”]}

Thus, the obvious violations of fundamental human and civil rights by the court and the authority and the biased treatment of political activist Elhan Aliyev have resulted in the violation of one of the fundamental rights of a democratic society – the Right to Liberty.