FOLLOWING THE TENSIONS IN AZERBAIJANI-IRANIAN RELATIONS, THERE WERE A NUMBER OF ARRESTS OF SHIITE THEOLOGIANS 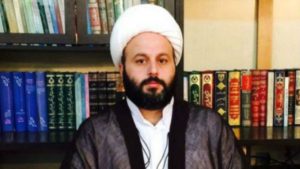 Analysis of violation of law during Sardar Babayev’s judicial proceedings

In attendance of: Kenan Aliyev, Lieutenant Colonel of the Justice, the Head of the Main Investigation Department of the State Security Service of the Azerbaijan Republic, and Ramil Adilov, the Justice Advisor of the Prosecutor at the Office on Control over the Execution of Laws in Investigation, Inquiry and Operational Investigation Activities of the State Security, Emergencies and Border Guard Service within the General Prosecutor’s Office of the Azerbaijan Republic

Sardar Babayev, the theologian and editor of the website www.maide.az, along with the site employees Jalal Shafiyev, Qadir Mammadov and Temkin Jafarov, were detained on 19 October 2021. All of them are the members of the Association “Spiritual figures of Azerbaijan“.

According to their relatives, at on 19 October 2021, at 4:17 p.m., the State Security Service officers detained their relatives and conducted searches in their residences. The officers confiscated their computers and phones in the course of raids. The next morning, everyone except Sardar Babayev was released.

Besides the above-mentioned individuals, on 19 October 2021, it was also detained the Chairman of the “Center for Protection of the Religious Freedom and Conscience”, Ilqar Ibrahimoglu. But, as a witness, he was released following his interrogation. See – https://www.azadliq.info/247624.html

Sardar Babayev was charged with committing a crime under the Article 274 (High treason) of the Criminal Code of the Azerbaijan Republic.

On 21 October 2021, the Baku City Sabayil District Court, having considered the case at a closed judicial session, issued a ruling to impose on Sardar Babayev a preventive measure in the form of detention for a period of 2 months.

The court verdict is unlawful and unjustified. The Article 154.2 of the Criminal Procedure Code of the Azerbaijan Republic enumerates all measures of restraint that can be taken against detainees. They are:

The most severe measure is, undoubtedly, arrest. The main objectives of detention are to isolate a person posing a danger to the society, suspected or accused of committing a crime (usually a serious one), obstruct his/her actions that may obstruct the investigation, and deprive him/her of the opportunity to abscond prior to the consideration of the criminal case at the court.

The court, in making a decision on the issue of a preventive measure, must assess all the circumstances as a whole on the basis of the evidence provided by the parties to the criminal proceedings:

9) existence of information reported to a person on suspicion of committing another criminal offence;

11) the risk of prolongation or repetition of illegal behavior, including the risk of lethality, that it is created by the suspect, or accused, related to his/her possession of weapons. See – https://nobili.ua/ru/news/blog/zapobijniy-zahid-senc-kriterii-1/

The court, considering the investigator’s application for a preventive measure in the form of arrest, must take into account that a preventive measure has nothing to do with punishment. That is why the European Court of Human Rights (ECHR) has clearly defined the boundaries between these notions. The European Convention for the Protection of Human Rights and Fundamental Freedoms requires the courts to ensure that, in all cases, an individual remains at liberty prior to trial and the courts must also consider the use of alternative precautionary measures that are not related to the arrest. An arrest is allowed only if there are grounds set out in the law. Furthermore, the court is obliged to specify these grounds in its rulings.

In the judgment on Sardar Babayev’s case, the court stated the following:

In addition, the court pointed to:

According to the Article 1 of the Law of the Azerbaijan Republic About exit from the Country, entry into the Country, and about Passports,

This right might be temporarily restricted in the following cases and simultaneously postponed in cases stipulated by the clause 4:

This means, that the investigating authority could have taken away Sardar Babayev’s passport prior to the sentencing (for the period of the investigation) and not to apply a preventive measure in the form of arrest. The reasoning that the accused could abscond abroad is groundless, as crossing the border of the country is possible only by presenting a valid passport at the border crossing point. In this case, the court could apply to the accused a measure of restraint in the form of a written pledge on not leaving the country.

The ECHR judgment in the case of Smirnova vs Russia from 24 October 2003, states:

The court did not specify the facts under which it considers the accused Sardar Babayev may flee from justice. The existence of the defendant’s permanent place of residence, work were not taken into account. Moreover, there was no risk of the accused interfering with the judicial process. He either did not destroy any documents or any other evidence or put pressure on the victims of the alleged deed. At least none of this was stated in the court ruling. The court limited it to abstract and general arguments. There was no concrete evidence or clear arguments to justify the preventive measure in the form of arrest in the court’s ruling.

The Decision of the Plenum of the Supreme Court of the Azerbaijan Republic “On Practice of Application of Legislation by Courts Considering Applications for Detention of Accused Persons” dated on 3 November 2009, states that the courts, when considering the applications for detention in 2008, did not comply with the legislation, at the same time there were mistakes, the validity of the request for detention was not comprehensively verified, also, the court rulings failed to provide reasons and the grounds for the defendants’ detentions.

Therefore, the Supreme Court Plenum’s resolution instructed the courts to observe the national criminal procedural legislation, the provisions of the Articles 5 (Right to liberty and security of an individual) and the Article 6 (Right to a fair trial) of the European Convention for the Protection of Human Rights and Fundamental Freedoms, as well as the European Court of Human Rights practice, according to which limitation of the right to liberty is allowed only if it is in public interest and if the freedom of an individual could cause negative consequences for his or her life or health.

Unfortunately, more than a year has passed since the adoption of the above Resolution of the Plenum of the Supreme Court of the Azerbaijan Republic, but the practice of the courts has not improved. As usual, all courts in Azerbaijan are limited to one-type, one-sided and unsubstantiated phrases, without specifying the precise circumstances that would confirm the validity of such measure as arrest.

There is no evidence in the court ruling demonstrating that Sardar Babayev poses a danger to the society.

Thus, the harshest preventive measure in the form of detention in respect to Sardar Babayev, chosen by the court, is not justified, and therefore the accused’s right to freedom must be considered as violated.