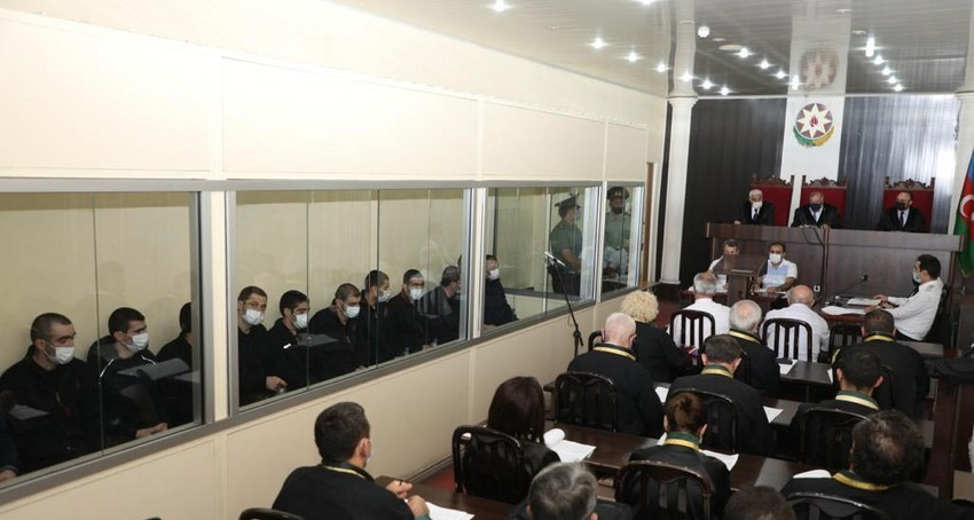 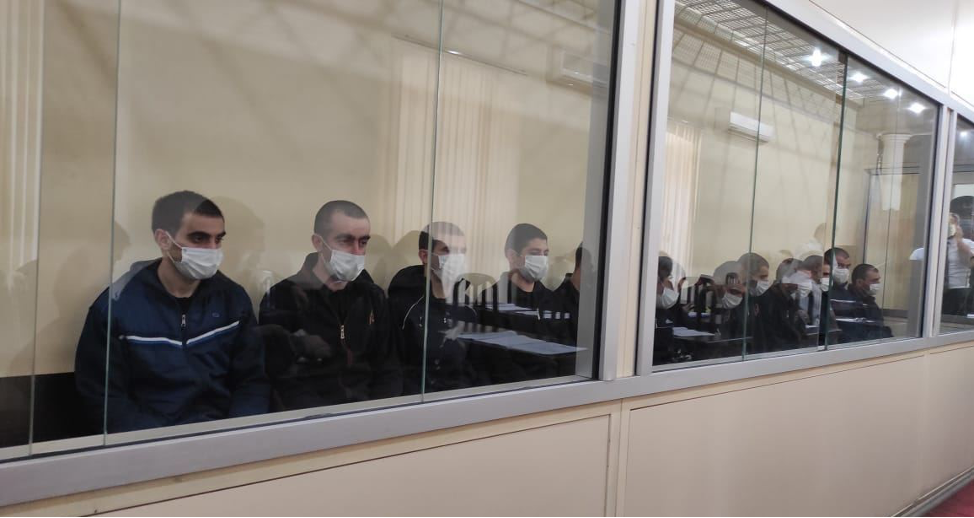 The 14 accused Armenian prisoners of war

There are no names of the state prosecutors or defense lawyers/advocates in the verdict text of the trial.

There was a serious fighting between Azerbaijani and Armenian forces over Karabakh and its surroundings at the end of September 2020. As a result of the 44-day war, the Azerbaijani armed forces liberated several towns and numerous villages of the Karabakh region and its surrounding territories. According to the Azerbaijani official information, on 26 November 2020, a group of Armenian armed units secretly penetrated into the territory of Azerbaijan and occupied positions in a woodland to the north-west of Hadrut village of the Khojavand District. It happened right after the ceasefire established as a result of the trilateral (Azerbaijan, Armenia and Russia) agreement signed on 10 November 2020. Thereafter, the Armenian armed formations committed terrorist and subversive acts against the Azerbaijani military and civilians. As a result of a special operation carried out by the Azerbaijani State Security Service, on 13 December 2020, the Armenian servicemen were disarmed. There were 14 defendants in the criminal case: Hrach Avakyan, Geham Serobyan, Armen Bagasyan, Gor Gasparyan, Kamo Sefilyan, Volodya Hakobyan, Gevorg Asatryan, Sisak Engoyan, Albert Petrosyan, Romik Sedrakyan, Aram Minasyan, Mkrtych Minasyan, Edgar Maresyan, Yuriy Karapetyan.

All of them were accused of committing crimes under the Articles 214.2.1 (Terrorism, committed on preliminary arrangement by group of persons, by organized group or criminal community), 214.2.3. (Terrorism, committed with application of fire-arms or subjects used as a weapon), 228.3 (Illegal purchase, transfer, selling, storage, transportation and carrying of fire-arms, accessories to it, supplies or explosives, committed by organized group), 279.2. (The attack on enterprises, establishments, and organizations or on separate persons by structure of formations or groups which is provided by articles 279.1 and 279.1-1 of the present Code) and 318.2 (Crossing of protected frontier of the Azerbaijan Republic, committed on preliminary arrangement by group of persons or organized group either with application of violence or with threat of its application) of the Criminal Code of the Azerbaijan Republic.

Similar charges were brought against another 53 individuals of the Armenian armed groups.

In the course of the trial, the defendants pleaded not guilty to the charges. They claimed that they had not been aware that they had crossed the Azerbaijani border; they had been loaded into a truck in Armenia and taken to Karabakh. At the same time, they declared that they hadn’t had any idea exactly where they were. On 13 December 2020, their commander asked one of the defendants to bring food to a certain place; it was already dark outside, and there were both Russian and Azerbaijani servicemen nearby. The Armenian soldiers laid down their weapons and surrendered to the Azerbaijani military.

A report issued by the Azerbaijani State Security Service on 16 December 2020, indicated that it was detained 62 Armenian military personnel during an anti-terrorist operation on 13 December 2020. On 14 December 2020, two more Armenian servicemen were detained.

During the preliminary investigation, the defendants stated that the official Armenian authorities had threatened them with arrest and imprisonment for a period of 8 to 12 years if they refused to serve in the army while they had been conscripted. The defendants’ profiles revealed that these men had been unemployed. The facts indicate that the defendants did not want to fight.

The court did not find any aggravating circumstances in the criminal case.

The Article 25 of the Constitution of the Azerbaijan Republic states:

The Article 7 On Courts and Judges also guarantees the equality of all before the Law and the Court.

Given that there has been a conflict between Azerbaijan and Armenia for more than 30 years and that the military clashes between two countries resumed in September 2020, the above commented trial should have been handled by objective and impartial judges based only on the Azerbaijani and International laws.

One of the main violations was that the trial was conducted without ensuring the principle of openness. This principle is often violated by the Azerbaijani courts in “sensitive cases”. That trial was no exception. Any independent journalists or other public representatives were not allowed into the courtroom. Among those in the courtroom, only pro-government journalists, whose names were on an unofficial list of the Presidential Administration, were in attendance. All others were denied access to the courtroom.

According to the Article 27.1 of the Code of Criminal Procedure of the Azerbaijan Republic,

While safeguarding state, professional, commercial, personal and family secrets in accordance with this Code, court hearings in criminal cases and on other prosecution material shall be held publicly in all courts of the Azerbaijan Republic.

The court’s verdict stated that the trial was held openly, but in reality, the court effectively deprived the defendants of their right to a public trial and the journalists wishing to cover the trial objectively of their right to obtain and share any kind of information.

In this context, there is a third party: namely, the public. If a journalist has a right to obtain and share the information, then the public has a right to get it, especially if it is a trial of a public interest.

In addition, the evidentiary foundation consisted of the Azerbaijani State Security Service documents, which were irrelevant to the case commented upon.

According to the Article 124.2 of the Criminal Procedure Code of the Azerbaijan Republic, the following shall be accepted as evidence in criminal proceedings:

The Article 138.1 of the Criminal Procedure Code of the Azerbaijan Republic states:

Proof shall consist in the obtention, verification and assessment of evidence in order to establish facts of importance for the lawful, thorough and equitable determination of the criminal charge.

According to the Article 144 of the Criminal Procedure Code of the Azerbaijan Republic,

Evidence collected for the purposes of prosecution shall be verified fully, thoroughly and objectively. As part of the verification process the items of evidence collected shall be analysed and compared with one another, new evidence shall be collected and the reliability of the source of the evidence obtained shall be established.

The Article 145.1 of the Criminal Procedure Code of the Azerbaijan Republic states:

According to the Article 145.3 of the Criminal Procedure Code of the Azerbaijan Republic,

If suspicions which emerge during the process of proving the charge cannot be removed by other evidence, they shall be interpreted in favour of the suspect or accused.

As stipulated above, there was insufficient evidential matter in this criminal case. According to the Article 146.1 of the Criminal Procedure Code of the Azerbaijan Republic,

The notion that sufficient evidence has been collected for the prosecution means that the amount of evidence on the facts to be determined is such as to allow a reliable and final conclusion to be reached on the case.

The defendants’ guilt was not proven and the doubts were not used in their favour at the trial.

Bearing the above in mind, it can be concluded that in the absence of a clear and sufficient evidential basis, the defendants’ right to liberty was violated.