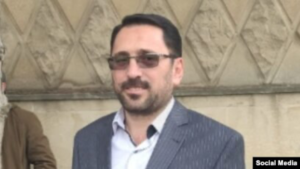 Analysis of violation of law during Elshan Abbasov’s judicial proceedings

The person who filed the application on arrest: Shamkhal Najafov, an investigator of the Investigative Unit of the Department for Combating Organized Crime within Azerbaijani Ministry of Internal Affairs

The person who requested the arrest: Jafar Hasanov, a prosecutor of the Investigative Department, and the Office of Oversight of Laws on Operational and Investigative Activities of the Azerbaijani Internal Affairs Agency.

Elshan Abbasov, a member of the “Muslim Unity” Movement, was detained by the men in civilian clothes and taken to an unknown location at 5.30 p.m. on March 3, 2022. For two days, Mr. Abbasov’s relatives did not know of his whereabouts. They managed to find out where Abbasov was, only on March 5, 2022. He was taken to the Department for Combating Organized Crime within the Ministry of Internal Affairs of Azerbaijan. According to the detainee’s relatives, he was deprived of the opportunity to contact his family by telephone in order to inform them of the reasons behind his detention.

According to the civil society representatives, Elshan Abbasov is persecuted for defending the rights of believers. Thus, in 2012, E. Abbasov was sentenced to a year imprisonment for taking part in an initiative to defend the hijab, and in 2017, he was arrested and sentenced to 2.5 years on charges of illegal arms and drug possession. According to the testimony of civil society activists, Elshan Abbasov had always been active in campaigning against drugs among young people, as well as arranging courses on the Koran, and was distinguished for being intelligent, knowledgeable and well-educated.

On March 5, 2022, E.Abbasov was accused of committing a crime under the Article 234.4.3 (Illegal manufacturing, purchase, storage, transportation, transfer or selling of narcotics, psychotropic substances committed in large amount) of the Criminal Code of the Azerbaijan Republic. In accordance with the prosecution, E.Abbasov illegally possessed and carried 8.399 grams of the drug methamphetamine, which was manufactured in an unauthorized manner.

On March 5, 2022, the Baku Narimanov district court issued a restraint order against E.Abbasov: to place him in custody for a period of four months.

The court verdict is unlawful and unjustified. According to the Article 8.0.1 of the Code of Criminal Procedure of the Azerbaijan Republic, the one of the purposes of criminal proceedings are defend individuals, society and the state against criminal attempts.

The Article 1 of the European Convention on Human Rights state,

The High Contracting Parties shall secure to everyone within their jurisdiction the rights and freedoms defined in Section I of this Convention.

Azerbaijan ratified the European Convention for the Protection of Human Rights and Fundamental Freedoms on April 15, 2002, and the country is a member of The Council of Europe; therefore Azerbaijan has assumed a positive obligation to implement the provisions of the above-mentioned Convention.

However, in practice we see quite the opposite. It was violated a number of procedural provisions in the criminal case commented upon.

In accordance with the Article 153.1 of the Code of Criminal Procedure of the Azerbaijan Republic, the prosecution authority is required to ensure the rights of any person under this Code, as well as under the Law of Azerbaijan on “Protecting the Rights and Freedoms of Persons in Detention”. This law is applicable as for a suspect as an accused person depending on his/her status.  These rights are as follows:

As indicated above, Elshan Abbasov was detained on March 3, 2022. However, for two days no information about his detention was provided to his family, who were also unaware of the grounds for his detention. The family could only guess about E. Abbasov’s location, as he had previously twice been arrested likewise.

Elshan Abbasov remained in the status of a suspect for two days (from March 3 to March 5, 2022).

Although the National Criminal Procedure Law enables such an approach, whereas the European Convention for the Protection of Human Rights and Fundamental Freedoms, Article 5(4) states,

“Anyone who is deprived of his liberty as a result of arrest or detention shall be entitled to have the lawfulness of his detention reviewed by the court without delay and his release if his detention is not recognized by the court to be lawful”. There is the word ” immediate” in the Article, which means “urgent, imperative, expeditious, fast, rapid; momentary, imminent, immediate, irrevocable, without delay, immediacy”.

In this case, the principle of “immediacy” was violated by the investigating body.

In respect to E.Abbasov the strictest measure of restraint has been chosen in the form of custodial detention. The Court did not provide in the ruling any reasons for imposing such a harsh preventive measure. In each particular case the judicial order of arrest must depict all the circumstances indicating that no other preventive measure than arrest could be imposed on the accused.

According to the Article 28 of the Constitution of the Azerbaijan Republic,

This right is enshrined both in the norms of National law and in international treaties. For example, the Article 5 of the European Convention on Human Rights states:

The judgment of the European Court of Human Rights in the case of “Fox, Campbell and Hartley v. the United Kingdom” dated August 30, 1990 states,

“The ‘reasonable suspicion’ upon which detention must be justified is an essential element of the protection afforded by Article 5 § 1 (c) against arbitrary deprivation of liberty. (…) The presence of a reasonable suspicion presupposes the existence of facts or information sufficient to persuade an objective observer that the person may have committed the offence. What may be considered reasonable shall, however, depend on the totality of the circumstances”. https://hudoc.echr.coe.int/eng#{“fulltext”:[“fox%20v.”],”documentcollectionid2″:[“GRANDCHAMBER”,”CHAMBER”],”itemid”:[“001-57721”]}

In the Court order commented upon, the imposition of preventive detention was justified by the gravity of the offence and the fact that the sentence for that offence exceeded two years (Article 155.3.1 of the Azerbaijan Republic Code of Criminal Procedure).

However, according to International Law, it cannot justify the imposition of a preventive measure in the form of arrest. The European Court of Human Rights (ECHR) case law suggests that “the need to combat terrorism cannot justify extending the notion of ‘reasonableness’ to interfere with the substance of the guarantee afforded by Article 5 § 1 (c). (Fox, Campbell and Hartley v. the United Kingdom, judgment dated 30 August 1990). In other words, the Court has demonstrated that even in the context of the fight against terrorism, and in the most difficult situations and accusations, the Court may not apply the specified precautionary measure without substantial evidence.

In the ruling on E.Abbasov’s arrest, the Court set out the following grounds which, in the Court’s view, justified the application of the arrest:

“… In order for suspicion to be justified, certain facts or information must be available to convince an objective observer that the person involved in the case could have committed the offence” (European Court of Justice (ECHR) the judgment in the case of Labita v Italy from 6 April 2000).

Yet, there is another interesting nuance in the case that should be pointed out in order to highlight the Court’s lack of impartiality. The Law Enforcement Authority that detained Elshan Abbasov, specifically the Department for Combating Organised Crime of the Ministry of Internal Affairs, is located in Baku’s Narimanov district. Earlier, another member of the “Muslim Unity” Movement, Razi Humbatov, was detained by the same authority in the Narimanov district and charged under the same Article as Elshan Abbasov. The Baku Narimanov district Court also issued an unjustified preventive measure in the form of arrest in relation to Razi Humbatov for a period of four months.

Further, the judgment specified that E. Abbasov had pleaded guilty to the charges brought against him. In this case there is reasonable doubt that the investigative authority has explained to the detainee his right to silence as guaranteed under the Article 66 of the Azerbaijan Constitution and Article 6(1) of the European Convention for the Protection of Human Rights and Fundamental Freedoms.

“Although it is not specifically mentioned in the Article 6 of the Convention, there is no doubt that the right to silence during police interrogation and the privilege not to incriminate oneself are recognised by the International Standards that underpin the notion of a fair trial in accordance with the Article 6 (…). By protecting the accused from being unfairly coerced by the authorities, these privileges serve to avoid procedural errors and ensure compliance with the objectives set out in the Article 6 of the Convention” (John Murray v. the United Kingdom, judgment of the European Court of Justice, 8 February 1996). https://hudoc.echr.coe.int/eng#{“fulltext”:[“John%20Murray%20v.”],”documentcollectionid2″:[“GRANDCHAMBER”,”CHAMBER”],”itemid”:[“001-57980”]}

The Decision of the Plenum of the Supreme Court of the Azerbaijan Republic “On the practice of application of legislation by the courts when considering motions to impose a preventive measure in the form of detention against the accused” adopted on November 3, 2009, outlines the common errors in the work of the courts when imposing a measure of restraint in the form of imprisonment. Namely, this Decision states that in 2008, the courts when considering the motions regarding the use of arrest did not comply with the legislation, at the same time a number of mistakes had been made, the grounds for arrest had not been thoroughly examined, the court decisions had failed to comment on the grounds for the most serious preventive measure in the form of arrest; the grounds for arrest were such general phrases as likelihood of hiding from the authority conducting the criminal proceedings, interference in the normal course of the investigation, avoidance of appearing before the investigating body, etc. The Court decisions had been not provided with the factual grounds for arrest, which could have been justified in the case. For this reason, the Plenum of the Supreme Court of Azerbaijan ordered the Courts to comply with the national criminal procedure legislation, the provisions of the Articles 5 (right to liberty and security of person) and 6 (right to a fair trial) of the European Convention for the Protection of Human Rights and Fundamental Freedoms, as well as the practice of the European Court of Human Rights according to which a limitation of the right to liberty is permitted only in the public interest and when the freedom of a particular individual may result in a negative outcome in the interests of society and cause a danger for a detainee.

Unfortunately, more than a year has passed since the adoption of this decision, but the courts’ practice has not altered for the better. The Courts in Azerbaijan, as in the past, limit themselves to one-sided, unjustified and unreasonable statements, without indicating the specific circumstances that could confirm the appropriateness and lawfulness of the chosen measure of restraint.

Once again, the case of Elshan Abbasov, arrested for the third time, recognized as a political prisoner by human rights activists was no exception. The one-sided, body-dependent investigative position of the court, the lack of an individual approach, the violation of the fundamental Norms of the AR Constitution, the Criminal and Criminal Procedural Legislation, failure to correctly observe the precedents of the European Court of Human Rights makes the Azerbaijani Courts a punitive mechanism in the general system of justice.