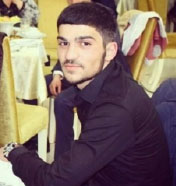 Another detainee in the “Ganja case” wrote about torture he had been subjected to in connection with the Ganja events of 10 July 2018. On 4 September, the agency Veten ugrunda published a copy of the letter of the accused Habib Qurbanov that was sent by his relatives. H. Qurbanov wrote that he was caught on video footage of participants on 10 July. “I had not been resisting, and the video clearly showed that I did not hit any policeman, and I had not either stones, knife, stick or anything else in my hands,” said in the letter.

H. Qurbanov heard that the police had been looking for him on 12 July. Having learnt about it, he and his father went to the Nizami police station in the city of Ganja. Barely entering the building, they encountered enmity towards themselves. He was beaten with fists and legs and then taken upstairs into the Police Chief Adalat Sadygov’s office. There he was shown a video. As soon as H. Qurbanov said that he hadn’t touched any of the policemen and it was seen on the video, Adalat Sadigov began beating him and this can be seen in the video, as Adalat Sadigov began beating him. Have tired, he ordered the other policemen to question H. Qurbanov in another room. He was taken to a large room on the second floor, where they tied his hands and legs, and then 15 policemen began beating him with their fists and feet. “Because of unbearable pain I started to scream and the police officers immediately covered my eyes and mouth with shoulder straps and duct tape. Then they continued beating me. I fainted, they poured water on my face and I got back to my senses. But my eyes were still covered with dust tape”, the accused wrote in his letter.

But it was not the end of his suffering. Again, he was electrocuted and as a result of torture he fainted. When he was back to his senses, they restarted their tortures with more violence. In the evening, he couldn’t walk at all and was brought back to his cell. His cellmates gave him water and provided some assistance.

He has been tortured for two days. He was constantly shown pictures though he did not recognize anyone. And then, he was beaten again.

Then, together with six other detainees, he was taken to the Kyapaz District Police Station, where all of them were brutally beaten.

A day later they were taken to the Ganja Court on Serious Crimes. “Two policemen by the name of Shirkhan and Ilham took me to the court cellar and beat me there again. And then they dragged me upstairs to the courtroom. The judge even did not look at me and authorized my arrest for four months. After that, the police pulled me back into the court cellar. And from there, they took me by car to the Ganja Detention Centre”, H. Qurbanov recalled in his letter.

They took everybody’s fingerprints and blood for analysis in the detention center and we were asked about our body wounds, “I answered that I had been beaten by the policemen. They wrote something down but I was not shown what it was. I found out later that it had not been written in the report, so I didn’t have any wounds on my body according to the police written statement”.

Qurbanov has not been allowed to meet with relatives or talk to them on the phone for 8 months. “And 11 months later, they came to us examining our bodies in search of injuries. They did it through the glass in the courtroom. We were asking them why they began to examine our bodies now, 11 months later, what marks of the batons could be seen now? They replied, ‘It’s not up to us,'” recalled Qurbanov in his letter.

After that, H. Qurbanov wrote a complaint that no one had reacted to his case and the torture he had been subjected to. “But someone at the Sabayil District Court told me, – we are sorry, but nothing depends on us. I am not guilty, I didn’t do anything wrong. I haven’t understood yet, what I was accused of. When I asked the judge, I was told that they had previously told me about it during the investigation. But nobody told me anything about my crimes and what I am guilty of,” concluded H. Qurbanov in his letter. 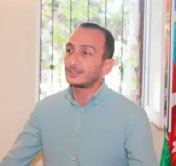 One of the leaders of the Muslim Unity Movement, political prisoner Ahsan Nuruzade, was subjected of repression. He was arrested in 2017 and in March, 2018, was sentenced to 7 years of imprisonment. First he was transferred to Colony #13, but due to his efforts to help prisoners there he was soon relocated to Colony #6, where he was kept for 8 months. In September 2019, several prisoners on the “Ganja case” arrived at this colony. As A. Nuruzade’s relatives told a correspondent of the agency Veten ugrunda, he tried to help these prisoners, too. He also applied to the colony management with a request for medical assistance to the newly arrived prisoners. His request caused the management frustration. First of all, he received a warning. And then, on 22 September, Ahsan Nuruzade was placed in a punishment cell for his activity. The day after, A. Nuruzade called his relatives and said that he had been transferred to the Colony № 17  in order to avoid contacts with the “Ganja case” prisoners.

On 27 September, Leyla Ismayilzade, Tale Bagirzade’s spouse, was called to the Investigation Department of the Ministry of Justice, where she was charged under the Article 317-1.1 of the Criminal Code of the Azerbaijan Republic (transfer or sending secretly prohibited items to convicted people). Her husband is the leader of Muslim Unity Movement.

Leyla Ismayilzade informed a correspondent of the website Caucasian Knot that on 21 March this year along with their children came to visit her husband who was kept in the Gobustan prison. They gave their belongings for inspection and went inside. “We handed our things over for inspection and were already with Tale. After a while, our belongings were brought in and Tale was shown a mobile phone that had been found in the bag of our three-year-old son Abbas. It was his grandfather’s phone, which we had been looking for at home for two days. Abbas had been watching cartoons on his phone and it turned out that he had put the phone together with his toys in the bag. Then the Penitentiary Service made a statement launching an investigation against me. It is not the first Tale’s term, and I know well what can and cannot be brought to him,” Ismayilzade said.

She thinks the Penitentiary Service made up the case to put pressure on her husband.

“There was no need to initiate criminal proceedings. As early as 21 March, I wrote in an explanatory note at the Gobustan prison that the phone was usually carried in secretly. I passed out all the bags for inspection. Our child put the phone in his bag without our knowledge,” said Bagirzade’s wife.

Ismayilzade’s lawyer, Fakhraddin Mehdiyev, believes there are no grounds to persecute his client. “In our opinion, this case has no legal grounds. The woman had no intention of bringing the phone through. She was not caught red-handed while handing the phone over in person or the phone had not been found at Bagirzade’s possession post factum,” Mehdiyev told a correspondent of the Caucasian Knot.

The penitentiary service’s public relations department confirmed that a mobile phone had been found in Ismayilzade’s belongings during a visit to her husband in prison, and an investigation had been launched into the matter. No comments could be obtained from the Investigation Department of the Ministry of Justice.

It should be noted that Ismayilzade is charged with the Article that stipulates a fine of 1,000-2,000 AZN (600-1,200 USD) or 2-year-correctional labour, or imprisonment for two years. 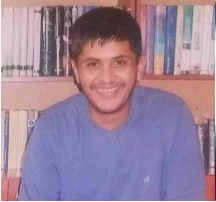 Eshgin Quliyev before his arrest 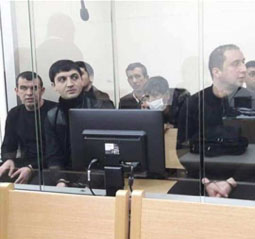 On 29 September, Eshgin Quliyev, who had been arrested on charges of participation in July 2018 rally in Ganja, died in the prison hospital. According to the Azerbaijani human rights activists, he had a number of serious diseases and his health condition had been aggravated by the torture and unfair conviction.

On 19 September, the court sentenced a group of seven defendants in the Ganja riot case. Eshgin Quliyev was sentenced to 20 years of imprisonment. But neither he nor the other convicts pleaded guilty.

Quliyev died of “cardiopulmonary insufficiency accompanied with deep coma, fourth stage AIDS, viral hepatitis C, anemia, and a brain tumor,” the Public Relations Department of the Penitentiary Service told a Caucasus Knot correspondent. According to the Ministry’s representative, all these diseases had been diagnosed in the Baku detention center in August 2018, since then he had been in the prison hospital.

The head of the Committee against Repressions and Tortures, Oqtay Gulaliyev, said that Quliyev’s condition was nevertheless aggravated as a result of the torture during the preliminary investigation and “psychological shock from an unjust conviction”. “Monitoring of the trial showed that Eshgin Quliyev, like many other defendants in the “Ganja case”, was wrongfully convicted. This guy is innocent. His diseases were deteriorated by the lack of effective treatment. This is the second case of the accused in the “Ganja case” death. Aydyn Qurbanov died in July,” Gulaliyev told a “Caucasus Knot” correspondent.

Quliyev’s death drew attention to the judicial and legal system of Azerbaijan imperfections, Samira Agayeva, the Deputy chairman of the D-18 civil movement, said. “Following Aydyn Qurbanov’s death, Eshgin Quliyev died in prison. A study of their cases gave grounds to believe that the men had been arrested without reliable evidence of guilt and on the top they had been subjected to torture. All this jeopardized their health and led to their death. Our organization issued a statement and demanded an independent judicial system that would guard citizens’ rights and protect them from unjustified prosecution on fabricated charges. We have also demanded to cease tortures,” Agayeva told a Caucasus Knot correspondent