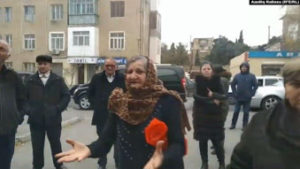 The prisoners’ relatives are in front of the Baku Court of Appeal, 3 December 2019

On 3 December, the Baku Court of Appeal was to consider the complaint of a group of 7 prisoners on the “Ganja case”. However, the trial was unexpectedly postponed until 20 December without any prior notice, which caused the relatives’ outbursts. They said that they had great difficulty coming from Ganja to Baku. It is complicated for them regularly traveling due to financial and physical reasons, considering their age and the distance of 650 km between the cities. But the judges never take that into account.

The families expressed their disagreement with the judge’s decision in front of the Baku Court of Appeal building, when they saw the Ganja Court of Appeal judge, Alizamin Abdullayev, who had made the decision.

“Why are you keeping us on the road? What kind of games are these? Why aren’t you hearing the case? We have been on the road for almost a year and a half and we are experiencing all kinds of hardship and suffering. What kind of mess and lawlessness you’ re setting up?”, the relatives  spoke out to the  Judge A. Abdullayev. But the judge preferred to remain silent and quickly entered the court building. When these people tried to enter the building following the judge, the police intervened and did not let them in.

Although this group of prisoners originally comprised 8 people, but one of them, Rashad Boyukkishiyev, was killed in July 2018 and, therefore, it was actually considered a case of seven. Meanwhile, one of these seven, Eshgin Quliyev, died in custody. Thus, the complaint was filed on behalf of the other six: Oqtay Huseynzade and Urfan Mammadov (sentenced to 18 years of imprisonment), Rauf Bayramov (sentenced to 9 years), his son Huseyn Bayramov (sentenced to 2 years), and Abbas Abbasov along with Elshan Mammadov (both sentenced to 7 years each). 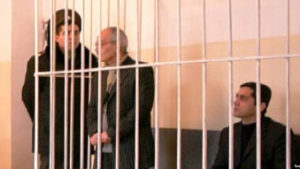 The trial of Rafiq Taqi and Samir Huseynov

The European Court of Human Rights (ECHR) on 5 December declared the decision on the complaint of the late publicist Rafiq Taqi and his colleague Samir Huseynov.

The complaint was related to the conviction for imprisonment for publishing the article “Europe and We” in the Sanat newspaper in 2006.

In the article Taqi compared Islam and Christianity in terms of morality and humanism. After the publication Taqi and the editor of the newspaper Samir Huseynov faced pressure from believers, who saw in the article an insult to the Prophet Muhammad. In Iran, one of the ayatollahs issued a fatwa to kill them.

A court in Baku found both guilty under Article 283.2.2 (inciting religious hatred) of the Criminal Code of Azerbaijan and sentenced Rafiq Taqi to 3 years, and Samir Huseynov to 4 years in prison. At the end of 2007, both were pardoned by the President of Azerbaijan.

In 2011, Taqi’s lawyer appealed to the ECHR. The complaint stated that the state intervened in freedom of religion and expression of convicted persons. The ECHR found in this case a violation of Article 10 (freedom of expression) of the European Convention on Human Rights and decided that compensation has to be paid to Rafiq Taqi’s wife and Samir Huseynov in amount of 12,850 EUR each of them

On November 19, 2011, Taqi was attacked by an unknown person who inflicted numerous stab wounds on the publicist. Four days later, Taqi died in the hospital.

This crime has not yet been solved. Before his death, Taqi linked the attack on him with criticism of Iran’s political power.

The complaint about the failure to solve this crime is in the ECHR in the process of communication.

The Prosecutor General’s Office completed an investigation into the criminal case of a “terrorist attack” against the head of the executive branch of the city of Ganja Elmar Valiyev and his bodyguard. On 3 July 2018 “Yunis Safarov as part of a radical religious group controlled from abroad committed an attack”, the Press Service of the Prosecutor General.

The prosecutor’s office claims that the attack was aimed at forcibly changing the constitutional system in the country and creating a Shari’a state in Azerbaijan.

The investigation was completed on December 5 and the case against 12 members of an organized criminal group, including Safarov, was sent to the Serious Crimes Court. Another 11 people were put on the international wanted list, the statement said. 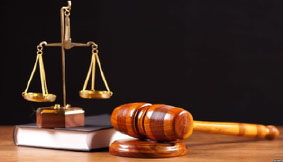 The trial on the criminal case of Bilal Ismayilov and Afghan Aslanov who had been accused of participation in illegal armed groups, under the presidency of the Judge Samir Aliyev, was over at the Baku Serious Crimes Court.

The men were arrested in 2014 upon their return to Azerbaijan. According to the charges, the offenders moved to Turkey in 2013, and from there to Syria, where they fought as members of the illegal armed groups. Each of them was accused under the Article 218.2 (organization of a criminal network (criminal organization), participation in a criminal network (criminal organization) or organizers’, leaders’ or other group representatives’ association) of the Criminal Code of the Azerbaijan Republic.

The sentence has been pronounced and according to it Afghan Aslanov and Bilal Ismayilov were sentenced to 9 years of freedom deprivation each. 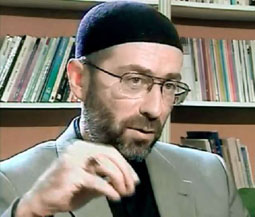 On 12 December ECHR declared the decision on the complaint of the leader of the Islamic Party Movsum Samadov, convicted in Azerbaijan.

The Strasbourg court ruled that the arrest of Samadov in 2011 was accompanied by violations of the rights guaranteed by the European Convention on Human Rights.

The ECHR ruled that the real reason for the arrest of Samadov was his speech in January 2011 at a party event, where he sharply criticized the authorities for banning the wearing of the hijab in schools and called on the population to protest.

First, Samadov was arrested administratively for “disobedience to the police.” Upon completion of the arrest, he was charged with terrorism, illegal possession of weapons, and an attempt to forcibly change the constitutional order.

Samadov was subjected to pre-trial detention without sufficient evidence of guilt.

The ECHR found that local courts violated Samadov’s rights to liberty and security of person and to a fair trial.

The Strasbourg court decided that compensation has to be paid to Samadov for a total of 4 thousand euros. Human rights activists recognize Samadov as a political prisoner.

The trial on the “Ganja case” has been continued under the chairmanship of the Judge Alizamin Abdullayev in the Baku Court of Appeal. It concerned the complaint of a group of 6 defendants.

Elshan Mammadov, who was sentenced to 7 years of imprisonment, the handicapped of the 2nd group, said in his speech that he had not served in the army due to his disability. But after his arrest, not taking into account his disability, he was subjected to the severe tortures, “Even if I had a gun here, I would not be even able to hold it in my hands. But I was accused of hiding a bomb in my house”.

Another defendant, Rauf Bayramov, was known as a mullah in his village. The reason for his arrest was that a few days prior to the July 2018 events, Rashad Babakishiyev, whom the investigation considered one of the main culprits of the July 10 events, had got into his car. Rauf’s son, Hussein Bayramov, was also arrested for the same reason.

Rauf Bayramov had been subjected to very brutal tortures such as cut wrists in the course of the investigation.

Oqtay Huseynzade’s  lawyer stated that Oqtay had been sentenced to 18 years of imprisonment, and he filed 18 petitions with the first instance court, but only one of them was partially granted.

The lawyer of the other convict, Urfan Mammadov, said that Leyla Abbasova, a widow of the killed on 10 July 2018, Colonel Samad Abbasov, sent a notarized statement to the Judge of the Ganja Appeal Court. In it, she testified that she had studied all materials provided by the investigation and believed that Urfan Mammadov had nothing to do with the crime committed against her husband. L. Abbasova also added that U. Mammadov’s father had also been a policeman, and she knew well that family, “Ganja is a small town. We all know pretty well each other, I am sure that Urfan Mammadov is not involved in these events,” the lawyer read out her statement.