There are a Baptist community and church in the village of Aliabad, north-west of Azerbaijan, south from the city of Zaqatala. Since 1994 the community have been trying to get a registration but in vain. The lack of registration has caused constant problems for Baptists over the years. The police regularly undertake the raids and detain worshippers of the Baptist community, including pastors Zaur Balayev and Hamid Shabanov. The latter was even sentenced to 2 years of suspended imprisonment on fabricated charges in 2009.

In December 2016, the police once again detained more than 30 adults and children for “illegal prayer” in the house of pastor H. Shabanov. Pastor H. Shabanov and another member of the church, Mehman Agamammadov, were fined each 1,500 manat (about 800 euros), which is higher than an average salary in the country for three working months. Pastor H. Shabanov managed to get a written decision only in January 2017, whilst M. Agamammadov, despite numerous attempts to obtain it at the court, has never get any.

Since that time H. Shabanov has been trying to receive cancellation of the court’s decision on the fine, applying to the different judicial instances.  Having received refusals everywhere, including the Supreme Court, in April 2019 he filed an appeal to the Constitutional Court.

However, on 06 May, the Constitutional Court sent a letter to Pastor Shabanov denying the re-examination of his request. “The court administration informed him that it had already considered the case. His second appeal was rejected and no hearing was required,” a Constitutional Court official said to a Norwegian  organization Forum 18.

Pastor H. Shabanov confirmed to Forum 18 that he had received a letter from the Constitutional Court in May and he has been consulting with other leaders of the Baptist Church about further actions regarding illegal police raids and fines against believers. 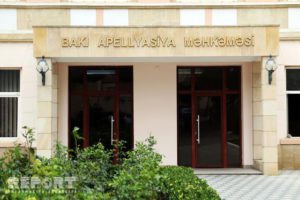 According to Veten ugrunda agency, on 23 May, a hearing on the complaint of a group of 11 convicted individuals in the so-called “Ganja case” ended in the Baku Court of Appeal presided by the Judge Chingiz Mammadov.  On 22 February 2019, the Ganja court found them guilty of committing crimes under the Articles 220.1 (mass riots) and 315.2 (resistance or use of force against a state official with the threat to life or health) of the Criminal Code of the Azerbaijan Republic and sentenced them to 7-10 years of imprisonment.

During the trial the lawyer of Orkhan Yagnaliyev, sentenced to 8,5 years of imprisonment, Zabil Qahramanly pointed out that the arrest of his client was completely illegal, “The court did not let us provide the evidence of Orkhan’s innocence, grossly violating the Articles 28, 46 of the Constitution and the Articles 13 and 21.2 of the Criminal Procedural Code of the Azerbaijan Republic, as well as the norms of international law (the Articles 6 (2), 5 (1) and 3 of the Convention of the European Human Rights, and the Convention against Torture), and did not consider the complaints concerning the torture of Orkhan Yagnaliyev who was detained and had administrative charges. After the administrative sanctions his second arrest is completely contradicting the law”.

During the hearing, many parents of the convicted expressed their protest against the lawyers’ silence, “Our children’s rights have been violated for 10 months. When will you finally start defending them? Why don’t they allow us, the parents, to speak?”

After that, the word was given to the convicted Maarif Hajiyev, who stated that he had been going to pay for his phone bill when he heard some shouting in the street. As he wanted to take a picture of what he saw on his phone, he was immediately captured by the police officers who dragged and threw him into the car, “I was held at the police department for two days. I have been beaten from morning till night, and I have not even been allowed to drink. They said we were radical believers, an organized group. Although I saw these guys there for the first time. I have never even opened the Koran, so how could I become a believer? I was tortured in order to confess that I recognized those whose photos were shown to me. But how can I lie pretending to know people I have never met?”

When the prosecutor Adalat Azimov said that his phone contained photos and videos of the famous theologian Tale Bagirzade and asked whether the convicted person would admit his testimony during the investigation, the latter replied: “I have heard the name of Tale for the first time in the police station. And I do not confirm my testimony pronounced in the course of torture, as I had been beaten and tortured severely in the Ganja prison in order to admit that I had hit a policeman. But how could I hit a policeman if they suddenly grabbed me from behind and dragged to the car driving to the station?”

Shahlar Rzayev, who was sentenced to 8 years imprisonment, said that he had known about the upcoming action in Ganja and therefore came to the square. His goal was to protest against the policy of lawlessness towards the citizens on the part of the former mayor of the city Elmar Valiyev: “I was concerned about his arbitrariness, constant insults of citizens, including believers, bans on prayers and much more. So, I came to the square to protest.” In response to the remark of the prosecutor Adalat Azimov that he had taken part in an illegal rally and shouted religious slogans, the convicted replied, “And for this any human should not be subjected to torture and sentenced to 8 years imprisonment. I was brutally beaten from morning till night. If I have done something wrong according to the law, so, the investigation and condemnation should be conducted according to the law! “

Then Ruslan Hasanov, who was sentenced to 8 years imprisonment, took the floor: “The events took place in the street where I live. And I did what anyone in my shoes would have done; after hearing the noise and shouting, I went outside to watch. Perhaps my mother fell or someone was hit by a car and needed help. I ran out into the street just with that in mind. And the police immediately ran up to me and forcibly took me to the Nizami police station, where 15 officers attacked beating me with their feet and truncheons.  My face got swollen from the beatings. A doctor came in and said that I had nothing, that everything was all right. Although my face had been swollen and my gums had been bleeding.”

As Tural Bayramov, who was sentenced to 8 years imprisonment, said in his speech, “On that day I was going to my grandfather’s house. On my way I encountered the police officers, and one of them stopped me and told the others that I also had to be detained since I had a beard. I was taken to the police department, where I has been beaten for 11 hours without any break. There, two policemen by the name of Asif and Elnur told me in the face that I had allegedly injured them in front of 58 witnesses, but none of these 58 testimonies had been shown to me.” The judge suspended the hearing and scheduled a new one for the 03 June.

Over the course of the session, the Judge Khagani Mammadov presided over the Supreme Court’s decision to ban the publication of the religious scholar Elshad Miri’s book. As the theologian’s lawyer Elmar Suleymanov pointed out to Forum 18, “we made it clear during the debate that the ban was completely illegal”. After which the Judge Kh. Mammadov asked the lawyer representing the interests of the State Committee for Work with Religious Organizations to comment on the position of this state body that prohibited the publication of the theologian’s book. But, according to Elmar Suleymanov, the lawyer of the authorities “could not reasonably refute our arguments.” Then Elmar Suleymanov took the floor again and pointed out that if the Supreme Court would not uphold the appeal of the theologian Elshad Miri, the latter would appeal to the European Court of Human Rights (ECHR) in Strasbourg. Then the Judge Khagani Mammadov  called upon the State Committee and Miri to reach an “amicable settlement” and set a new meeting on 25 June.