To convict an opposition member, it is enough to charge him with accusations made by the police, instead of a judicial investigation 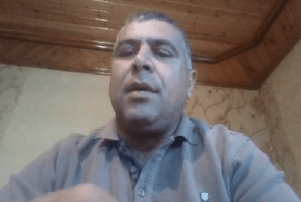 Analysis of violation of law during Zamin Salayev’s judicial proceedings

Zamin Salayev, a functionary of the opposition Popular Front Party of Azerbaijan (PFPA), the Chairman of the PFPA Salyan branch, is known for his intense opposition activities and harsh criticism of the incumbent president. He has been repeatedly prosecuted by the authorities for his engagement in social networks and participation in rallies.

In September 2019, the press reported that a 21-year-old girl had stabbed the chief of the Salyan District Police Investigation Department in the back with scissors. The Azerbaijani media wrote that Aytakin Abiyeva, a 21-year-old resident of Salyan, and the police captain, the chief of the Salyan District Police Investigation Department, Hamza Azizov, had a secret relationship. But they had not been officially married. Her parents arranged for the girl to be wed to a relative, yet, they soon got divorced. Following the divorce, the girl called Azizov and asked him to resume their relationship, on which she was turned down. In a fit of rage, the girl hit the policeman in the back with scissors. Aytakin Abiyeva, according to the verdict of Lankaran Court of Serious Crimes, was found guilty and sentenced to 7 years imprisonment for committing that crime.

Zamin Salayev, a native of Salyan City, carried out a personal investigation of the case, as a result of which he came to the conclusion that the policeman had tried to rape the girl, whereupon he had received a stabbing with scissors. Z. Salayev claimed that he had the evidence of Azizov’s guilt in his possession. Hamza Azizov introduced himself as a relative of Vilayat Eyvazov, the Minister of Internal Affairs, therefore no one confronted him. Only Zamin Salayev turned up to Hamza Azizov and told him in person that he had committed a crime, which he had to be punished for. That conversation was filmed by Z. Salayev on video and circulated in the social networks.

On 13 January 2020, Z. Salayev and two other PFPA functionaries went to have dinner in one of the cafes located in the area of the Baku Sabayil district. There, they were approached by the officers of the Baku City Police Headquarters and detained. All three were examined for breathalyses. Z. Salayev’s blood test revealed a small amount of alcohol. After that, the police officers drew up the administrative reports where it was said that all three of them had quarreled loudly outside the cafe. Two functionaries were fined 50 AZN each, whereas Zamin Salayev was brought to the court.   On 13 January 2020, the Baku Sabayil District Court found Z. Salayev guilty of committing an administrative offence under the Article 535.1 (Disobeying the police officer’s lawful demand) of  the Code of Administrative Offences of Azerbaijan Republic and sentenced him to a month of administrative arrest.

On 24 January 2020, Zamin Salayev’s son, Ogtay Salayev, met with his father. Having seen his father, Ogtay Salayev told journalists that his father had been subjected to torture, inhuman and degrading treatment while being in the 8th police station. That fact was testified by Zamin Salayev’s letter that he wrote in the 8th police station. Zamin told that he had been severely beaten by 10-15 policemen. As a result of the beating, a hernia in his stomach had burst out. The policemen had to invite doctors from the hospital of the Internal Affairs Ministry who insisted on the necessity of operation, but the policemen did not allow them to do it. The surgery was performed after his release.

The PFPA activists are convinced that Z. Salayev’s inhuman treatment and arrest was related to his investigation of the police captain Hamza Azizov’s crime. See: https://www.youtube.com/watch?v=auHGQVUo1Ww

In April 2020, Hamza Azizov, the Captain of the Investigative Police Department of the Salyan District Police, filed a private complaint with the Salyan District Court, asking the court to find Zamin Salayev guilty of committing crimes under the Articles 147.2  (The slander, which is connected with accusation of committing serious or especially serious crime)  and 148 (The Insult) of the Criminal Code of the Azerbaijan Republic (CC AR).

Zamin Salayev was called upon to the Salyan District Court on 20 April 2020. However, he was not informed about either the charges against him or the trial. And the same day, at the preliminary hearing without the case being investigated, he was found guilty under the Articles 147.2 and 148 of the CC AR, and sentenced to 2 years and 3 months of imprisonment. He was detained in the courtroom.

The court verdict is unlawful and unjustified. According to the Article 147 of the CC AR:

147.1. The slander, is distribution of obviously false information which discredit honor and dignity of any person or undermining his reputation in public statement, publicly or in mass media shown products –

147.2. The slander, which is connected with accusation of committing serious or especially serious crime –

According to the Article 148 (Insult) of the CC AR:

The Insult, is deliberate humiliation of honor and dignity of a person, expressed in the indecent form in the public statement, publicly or in mass media shown product –

Defamation (from Latin diffamatio “disclosure, dissemination”) is the spreading of libelous information, which may not be defamatory, as well as publications in the press; it is an act known to the criminal law as a crime similar to libel, but which differs from it in two ways:

– Defamation is the disclosure of any embarrassing facts in the press, while libel can be committed either in print, in speech (publicly) or in writing.

It should be noted that there are several types of information, which depending on the conformity of the disseminated information with reality and a distributor’s subjective attitude to its actions:

Only misleading information in the form of libel or slander is subject to criminal prosecution. See: https://en.wikipedia.org/wiki/Defamation

Candidate of Law, an assistant professor M. Zhaglina describes the need to differentiate the approach to information in her article “Defamation and protection of honour, dignity and business reputation”: “No doubt, it is impossible to consider that any dissemination of relevant information is illegal and should be subject to legal liability. In our opinion, here, a differential approach is necessary, as there are various reasons behind the information on defamatory circumstances. It should be recognized that, in some cases, the information dissemination on unworthy actions of the perpetrator may be dictated by social needs or for educational reasons. Discovery of the unfortunate facts that occur in reality and characterizing the activities of a particular person is advisable in some cases. As A.L. Anisimov points out, “it is admissible and justified to make public the disreputable actions of any individual that go beyond the personal sphere and affect the interests of any groups… or society as a whole. Of course, the same immoral acts should not be punished multiple times. On one hand, a citizen cannot be reminded of his past sins all the time, but on another, the constant reference to already existing facts reduces the educational value of information, and it loses its power”. See: – file:///C:/Users/User/Downloads/diffamatsiya-i-zashita-chesti-dostoinstva-i-delovoy-reputatsii.pdf

Thus, the essence of any defamation dispute is to resolve the conflict between the right to defend one’s honour, dignity and the right to freedom of expression and communication. Libel is the dissemination of intentionally false, defamatory information. In other words, it is the dissemination of false, defamatory information with the intent of directly defaming a person. Thus, the existence of direct intent transforms the defamation as a civil offence into a crime.

However, in the abovementioned reference to the Youtube Zamin Salayev indicates that he is holding letters from a girl accusing Hamza Azizov in rape. In other words, his accusations are based on the girl’s words. See: https://www.youtube.com/watch?v=auHGQVUo1Ww

It should also be noted that the raped girl’s family members released a video message, in which they said that the police had put pressure on them demanding not to complain about the policeman’s actions and threatened to arrest them. The video message also confirmed the information provided by Zamin Salayev.

The right to freedom of thought and speech is stipulated in the Article 47 of the Constitution of the Azerbaijan Republic. According to this Article:

– necessary in a democratic society,

– in the interest of national security,

– or of territorial integrity, or public safety,

– in order to prevent riots and crime,

– to protect public health and ethics,

– to protect the reputation or rights of others,

– to prevent the disclosure of information that has been confidentially obtained, or to ensure the authority and impartiality of justice.

The criminal intent of Z. Salayev in disseminating the information about Hamza Azizov was not proved in the course of the trial.  Z. Salayev repeatedly stated that his goal had been to inform the public that Hamza Azizov, as a police officer, committed an illegal action.

The public prosecutor, as acted by Hamza Azizov at the trial, could not prove the criminal intent of Zamin Salayev to discredit him, the prosecutor, in the media. The court, issuing the sentence, did not demonstrate an individual approach to the case, but, violating the presumption of innocence, treated the defendant biased, since Z. Salayev, being a member of the opposition party, had strongly criticized the state’s top officials.

This case was to be considered in the civil rather than criminal context, Hamza Azizov could have demanded compensation from Z. Salayev for his moral harm. However, as can be seen, the goal was to prosecute Zamin Salayev, as a result of which the court sentenced him to imprisonment.

One of the principles of criminal procedure is the equality of all people before the law.  According to the Article 6.1 of the AR Criminal Code, “The individuals who have committed crimes are equal before the law and subjected to the criminal treatment regardless of their race, ethnic background, affiliation to religion and beliefs, their native languages, sex, origin, wealth, official position, or affiliation to political parties, trade unions and other public associations, as well as any other circumstances”.  According to the Article 6.2 of the AR Criminal Code, “No one may be brought to criminal responsibility or punished, or exempted from punishment or criminal liability on the grounds stipulated in the Article 6.1 of this Code”.

The European Convention for the Protection of Human Rights and Fundamental Freedoms, in its Article 6 (1), sets out the right of everyone to a fair trial: “In the determination of his civil rights and obligations or of any criminal charge against him, everyone is entitled to a fair and public hearing within a reasonable time by an independent and impartial tribunal established by law”.

The burden of proof in criminal proceedings must be upon the prosecution while the doubts are to be interpreted in favour of the accused. Therefore, it is incumbent upon the prosecution to provide evidence sufficient to substantiate the allegation of guilt. The ECHR Article 6(1) also points to the principle of equality of the parties. Thus, the judgment of the European Court of Human Rights (ECHR) in the case of Bonich v. Austria on May 6, 1985, (para. 32) states: “One of the requirements of a ‘fair trial’ is the ‘equality of the parties”, which presupposes that each party must have a reasonable opportunity to present its case under conditions where neither party has a distinct advantage”. – https://hudoc.echr.coe.int/sites/fra/pages/search.aspx?i=001-57443

In the case of Zamin Salayev, the principle of equality of the parties had been violated, which had resulted in discrimination based on their political beliefs. The violation of this principle should be regarded as a violation of the provisions stipulated in the Article 14 of the European Convention for the Protection of Human Rights and Fundamental Freedoms, that prohibits discrimination based on sex, race, colour, language, religion, political or other views, national or social background, belonging to a National minority, financial situation, birth or any other circumstances.